Malpractices in the Medical Education Sector back in the media !

Kathmandu -  This week the media focused on the matters of disasters like erosion and landslide, politics, developmental projects etc. where the education matters covered were related to medical, policy, exam, Covid and international incidents of violence in school. Other news included BPKIHS offices padlocked demanding resignation of officials, New School Education Plan, NEB plans to conduct Grade XII exams from August second week, and National Medical College demanded an explanation for not paying additional fees to two students against the government policy as claimed by the students. 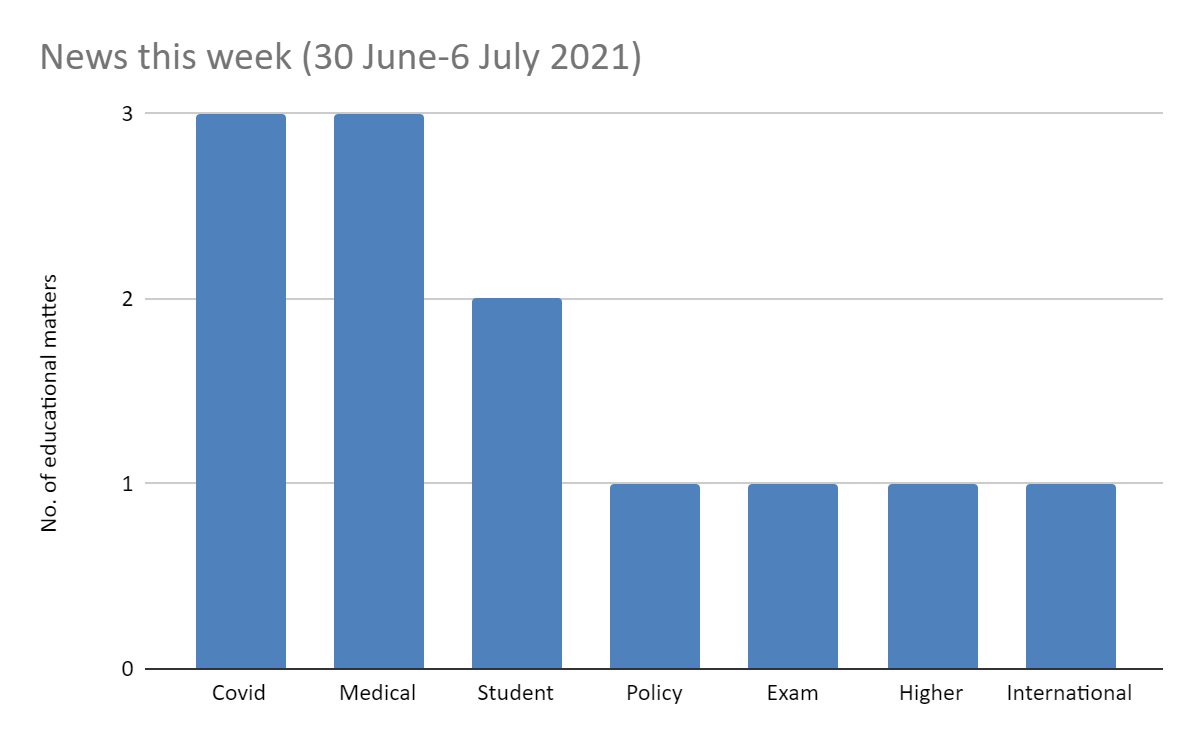 - News stated that agitating students, doctors, and employees padlocked the offices of all four office bearers of BP Koirala Institute of Health Sciences, Dharan, demanding their resignation. Agitators have charged that irregularities and mismanagement have escalated at BPKIHS due to the Vice Chancellor, Rector, Registrar and Hospital Director. They have demanded the appointment of VC, rector, registrar and director on the basis of meritocracy.
- Another follow up news stated that the vice-chancellor issued a statement expressing confidence that the present agitation would be instrumental in pulling the institute out of the throes of the crisis facing it. The VC also called the news reports false, claiming the news reports were malicious and intended to defame him, stated the news.
- Another news article stated that Birgunj-based National Medical College has demanded an explanation for not paying additional fees to two students studying on government scholarships. Two students who are studying in the fifth year of MBBS, were not allowed to fill the examination application form, stated the news. The students had faced a similar situation last year as well but were permitted to take exams after the directions of the Medical Education Council stated the news. Students have stated that the fees asked are of services like Hostel fee which the students have not registered for, but are being forced to pay.
- An opinion article by the Joint Secretary of Ministry of Education, Science and Technology (MOEST) expressed that MOEST has been preparing a long-term school education plan to succeed the currently ongoing School Sector Development Plan (SSDP) in July 2021. The proposed plan New School Education Plan (NSEP) covers school education, from one-year pre-primary education to grade 12. MOEST and its agencies from the federal level should carry out sample monitoring and analyse these to arrive at corrective measures stated the article.
The article calls on coordination between three tiers of government, but also envisions federal control to do the monitoring and direct corrective measures. The approach of the article fails to consider that the federal government can rather play the role to recognize, promote and support research and experimental practices by the local governments. It could support and motivate better practices, instead of considering policing with the thought that local governments will need to be monitored for corrective measures and will not do right without monitoring.
- Another opinion article expressed concerns regarding the alternative online classes where the author stated that the class schedule from 10 a.m. to 4 p.m. in the name of alternative means, does not seem practical.
- News stated that the National Examination Board has started laying the groundwork for conducting the long-awaited examination of Grade XII from the second week of August. The NEB has sought the government’s permission to conduct the examination according to a new schedule, stated the news. Grade XII examination was earlier scheduled to begin on June 9, but the government decided to put off the examination due to the surge in coronavirus cases in the country.
- An international news article stated that about 150 students are missing after armed men raided a boarding school in Nigeria’s Kaduna state. The attack is the 10th mass school kidnapping since December in northwest Nigeria, which authorities have attributed to armed bandits seeking ransom payments, stated the news.
'Education this Week' is a joint effort to analyze the press coverage of education in Nepal’s selected print media published in Kathmandu. The main aim of this effort is to identify and explain major education issues picked up by the media and give back and foreground the news. This, we believe, will help policy makers and other responsible people to keep abreast with ongoing concerns and discussions on and around education. EduKhabar, in collaboration with the Center for Educational Policies and Practices (CEPP), has produced this analysis based on the news printed in Kantipur (Nepali) and The Himalayan Times (English) between 30 June-6 July 2021 (16-22 Asar, 2078) - Editor.
Read this analysis in Nepali : चिकित्सा शिक्षाका विकृतिमा केन्द्रित साता
प्रकाशित मिति २०७८ असार २६ ,शनिबार