Kathmandu - Apparently, a large portion of the media coverage on education dealt with Dr.KC's 'Satyagraha', with editorials, front page news and pictures, letters to the editorial, opinion articles and coverage of protests and solidarity in support of his strike. By the end of the week, the government signed an agreement with Dr. KC for the 19th time. Volume of other news included is the status of the opening of schools in different municipalities as alternative learning was found unsuccessful while in some municipalities’ schools were shut down as COVID cases surge up including the news of the Minister for Education catching Covid-19. 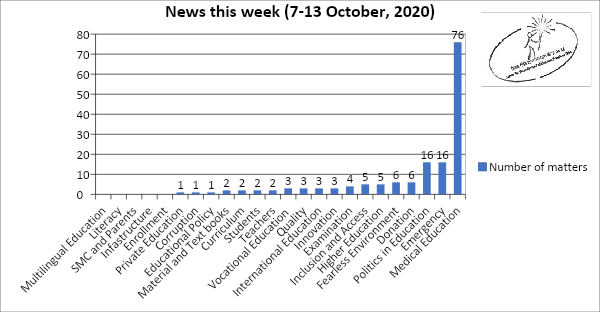 The media reported that an agreement was signed between the government and Dr. KC’s team which includes establishing medical colleges in various provinces and starting academic programs in Karnali Academy of Health Sciences, Jumla from next year after the construction of physical infrastructure and management of human resources. The agreement also reads that the MBBS program will be started in Geta Medical College in ‘Sudurpaschim’ (Far-western) Province within three years as reported in the article. As per the agreement, the budget will be released for running MBBS programs at Pokhara Academy of Health Sciences. Infrastructure development for running MBBS programs at Bardibas Medical College in Province 2 will be expedited. The agreement also includes amending the National Medical Education Act 2075, as per the agreement reached between KC on 26 July 2075, within three weeks are other outcomes of the deal.

An editorial stated that the fact that he has had to stage a hunger strikes time and again to push his agenda to address anomalies in the medical education sector. The sector has attracted heavy investment by the private sector causing medical education extortionate. It also stated that Dr. KC’s lone crusade to lower the fees for medical education in Nepal and push new medical colleges away from the capital has borne fruit. As a result, fees for general medicine and dental courses have been more stabilized; the number of scholarships and reservations in government medical colleges has increased while efforts are being made to establish one government-run medical college in each of the seven provinces. It is hard to be assured of the appointment of officials under a fair criteria. 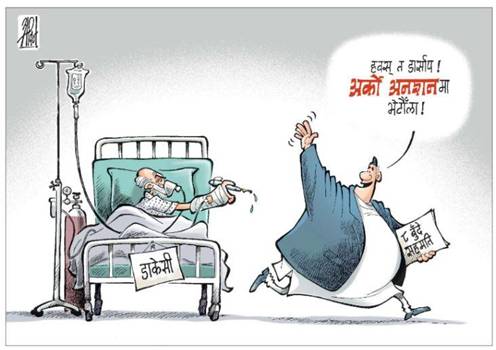 Figure: “Ok, doctor sahib, see you in your next hunger strike!” Graphics depicting 19th agreement between the government and Dr. Govinda KC on medical education reform covered on the front page of Kantipur Daily on 12 October, 2020.

The case of medical education institution practices and the public revolt for reform has been the most followed media story throughout these years. The case also indicated the level of struggle and civil mobilization required for reform at school level to break the status quo where private institutions have become the standard while public schools struggle and aspire to meet the standard. Dr. Kc's movement and citizen's mobiliation along with the media will definitely guide the future and hammer it home the needed citizen’s active engagement on the issue.

Community schools shut for months due to COVID-19 have started reopening in Rautahat. All the community schools located at Fatuwa Bijayapur and Garuda Municipalities are set to reopen as online classes and alternative teaching methodology have proven ineffective whereas, the schools those were open in Dang and Bajura Districts started closing back again after COVID-19 risk was up as teachers have returned to their workplace with the virus, stated the news.

After a teacher was diagnosed positive with COVID infection, Bagmati Rural Municipality, Makwanpur (where CEPP is working) was reported to close schools again. Meanwhile, the news also reported that the WHO is seriously concerned with the stress caused to children by online learning as 72% of mental health problems are related to children.

Local levels deployed teachers to conduct classes in Kailali district, the news reported. The news further stated, up to seven students had been called at a particular spot to attend the class by maintaining social distance.
The government has theoretically allowed educational institutions to conduct exams of students for all levels ensuring physical distance and other health safety measures. In the case of vocational education institutions, the number of students was set at 25. The news also reported that TU will conduct the postponed examination after the first week of December and the postponed CTEVT exams will resume after 'Dashain' festival. The MoEST is also planning to conduct grade 12 exams after Dashain. The government’s decision draws flak as it could increase the risk of COVID transmission..

Convening of the SAARC-Education Ministerial' experience-sharing meeting about teaching/learning during Covid-19 was reported.

The Cabinet, formed a committee to appoint TSC's Chairperson and two members (one female), gave permission to fill-up the vacant post in NEB, approved the amendment of ‘Madan Bhandari Science and Technology University Infrastructure Development Committee Directive-2075’, in the media.

Padma Kanya Secondary School in Kathmandu takes home examination by sending questions to student through the ‘Messenger’ for the students who are outside the valley, in the news.

The Education Committee of Gokarneshwor Municipality has initiated school education by adopting full safety protocols this week, after power disruptions became a routine. Children attending online classes, as schools are shut to break the chain of COVID transmission, have been bearing the brunt of frequent disruption of power supply. Due to the disruption of power supply for four days in a week in the north-east part of the federal capital, Kathmandu, the children are denied their right to education, stated a news report.

Two schools have opened for remaining close for long: Makaipur Primary school of Gorkha District after two years of closure and a newly-constructed building of Shree Saraswati Secondary School, Tikapur in Kailali District, built with Government of India's financial assistance of Rs. 33 million was inaugurated, the news reported.

Other matters covered in the media included: Food and Agriculture should be part of regular curriculum from early grades; two students arrested in charge of thrashing TU, Sociology Ass. Prof. Chilaune with iron rod- an editorial expressed concern with the violence in University; Online convention of KU Professors Association; Kathmandu-based Innovate Tech in Baluwatar forwarded a proposal to pay up to Rs 200,000 to around 100 technicians, teachers and subject matter experts from ‘My Second Teacher App’; Opinion on how school curriculum is implanting caste stereotypes in young minds; Widowed and rape victim women in Rolpa seeking support to educate her kids; KU receives an annual grant of Rs. 200 million from the government but offers a total of one MBBS scholarship; Students in Bharatpur Metropolis manufactured a car in the lockdown period; AI enabled platform is making online classrooms smart in Nepal and elsewhere; Agriculture and Forestry University sought registrar through open competition.

'Education this Week' is a joint effort to analyze the press coverage of education in Nepal’s selected print and online media published in Kathmandu. This week, reports included online portals SetoPati, NayaPatrika and My Republica. The main aim of this effort is to identify and explain major education issues picked up by the media and give back and foreground of the news. This, we believe, will help policy makers and other responsible people to keep abreast with ongoing concerns and discussions on and around education. EduKhabar, in collaboration with the Center for Educational Policies and Practices (CEPP) , has produced this analysis based on the news printed in Kantipur (Nepali) and The Himalayan Times (English), Dailies and online news portal SetoPati, NayaPatrika and My Republica between 7-13 October, 2020 (21-27 Ashoj, 2077) - Editor.