Education News from KC back to Exams

Kathmandu - This week a drastic reduction in news dedicated to education was noted- a clear evidence of the influence of Dr. KC’s agitation in making the news. Of course, it has also been influenced by upcoming Dashain.

NEB to start grade 12 examinations from 24 November, the media stated. Marks obtained in grade 11, comprise 40% and 20% from practical exam or internal evaluation. Remaining 40% will be coming from the one and half hour close-book written exam at the home centre. If an examinee is infected with COVID, he/she will be examined after recovery. If it is not possible for the students to go to the school i.e. home centre where they are studying and take the exam, there will be an arrangement to take the test in the school nearest to the students’ location. Due to COVID, all school level students who are learning at home through alternative means will be promoted in this academic session by adopting more than 50 methods of evaluation given in Curriculum Adjustment Framework rather than taking exams, CDC Director was quoted stating.

The MoEST was reported once again instructing to apply new curriculum in grade 11 following complaints that some schools were still teaching the old one. The MoEST has also stated that it will monitor whether the schools have implemented the new curriculum or not.

It seems parents, municipalities and private institutions are still unaware that the MoEST has already given full authority to the Municipalities to monitor and control private schools on the issue of the fees. Schools are supposed not to take any kind of fees without an approval of the Municipality. 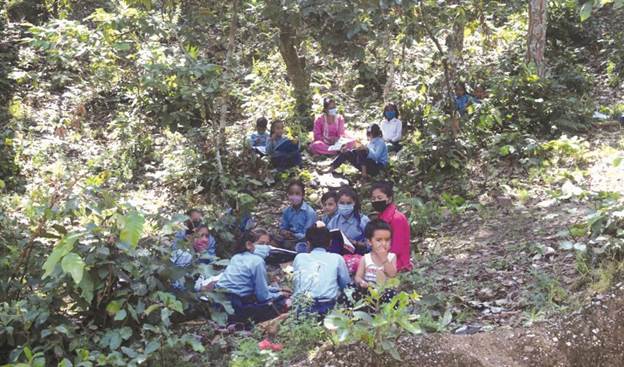 Picture: Students attending a class in a forest at Chaptari of Isma Rural Municipality, in Gulmi posted on 14th October 2020 at The Himalayan Times.

While no description report on the picture was covered in the media, it can be understood as coverage of the alternative learning method in rural regions by teaching children in small groups close to their neighbourhood. We should note that in many countries with successful academic records like the Netherlands, 'forest kindergarten' is a method for learning in early age for holistic learning and development of children at a young age. In their context, the forest is not just the location but the main curriculum. Here the children are in the forest, likely studying textbooks most likely about something else less relevant to their reality. They could also be studying about nature, environment or plants and animals in text composed with pictures while seated in such a vast reality of nature around them!

In Saraswati Secondary School in Godawari Municipality-11 of Kailali district, poor students were not able to get textbooks as Rs. 2000 was needed to enroll them to enable them to receive the textbooks. They also don’t have any access to the internet and/or television. They even don’t know how to use the radio for learning. They also don’t know about the NT Data Pack for their mobile. Even few have mobile phones let alone the smartphones. Some students got married and some left the school for work. Earning for livelihood comes first over everything. According to the Principal, the teachers don't have any option except mobilizing teachers to village clusters to run classes physically for grade 8 and 10. He further mentioned that there is a high risk of dropout, the news reported.

Ironically, a private company was reported launching 'e-Class' software for recorded online classes meeting the requirements of CDC. Students have to pay Rs. 1200 a year for recorded video of every chapter, assignment from the teacher, notes, multiple-choice question tests, discussion forum, booking an appointment for teachers and even research papers.

Other news stated that the government’s plan to distribute 6 million NTC SIM cards to students was not thoughtful enough and it was the government's a lazy populist effort.  It questioned why the government did not consider providing SIM cards for students based on the network availability of the location, or not consider paying the charges needed to use the SIM if it was considering supporting the marginalized.

One of the letters to the editor suggested that the government needs to document and do a sincere review of academic activities in the Pandemic.

The government must ensure that no student will have to ‘lose their academic year' due to the pandemic. Every student should be able to continue to the next level. Government was reported having started a survey to study the effectiveness of the Alternative Learning System which we hope will be completed soon and address the issues.

Province 2 has allocated Rs. 6. 25 million for scholarship and Rs. 24 million for a hostel for Dalits, in comparison to Rs. 927.5 million for building temples, a front page of the news covered.

A Raute girl’s commitment to study law after she passed SEE was reported stating that she received free education as ensured by the government policy.  She aspires to be the first judge from the Raute community to work for the rights of the marginalized communities of Nepal. Rautes are the last of the nomadic groups in Nepal.

Other matters covered in the media are: Dr. KC discharged from the hospital; lack of strategic planning or organized group to ensure the implementation of the treaty signed between Dr. KC and the government; The office of the VC of KAHS, Jumla district locked by the Staff Welfare Society alleging VC for appointing the Dean of faculty of Public Health in an irregular manner; The Panchkhal Municipality of Kavrepalanchowk district giving Dashain (festival) leave to teachers and students with the condition of spreading public awareness about COVID and health safety at home and in the community; A teacher stated that in these hard times of pandemic, children have managed to represent their adaptability while teachers lacked behind in being accustomed to technology; Suryabinayak Municipality of Bhaktapur district was reported to provide additional one hundred thousand to permanent teachers (30 years of service or 50 years of age) who take voluntary retirement by 15thNovember; Nepali students stopped in Guangzhou when the Nepal Health Desk in TIA didn’t recognize the PCR report of China as Real Time-PCR (PCR test is called Nucleic Acid Test in China); The land of the Far-western University returned that  was occupied by squatter settlers under the then Maoist (part of present NCP - the ruling party); The Cabinet decided that youths who have passed secondary level education will get self-employment loan of up to Rs. half a million from commercial banks.

'Education this Week' is a joint effort to analyze the press coverage of education in Nepal’s selected print and online media published in Kathmandu. This week, reports included online portals SetoPati, NayaPatrika and My Republica. The main aim of this effort is to identify and explain major education issues picked up by the media and give back and foreground of the news. This, we believe, will help policy makers and other responsible people to keep abreast with ongoing concerns and discussions on and around education. EduKhabar, in collaboration with the Center for Educational Policies and Practices (CEPP) , has produced this analysis based on the news printed in Kantipur (Nepali) and The Himalayan Times (English), Dailies and online news portal SetoPati, NayaPatrika and My Republica between 14-20 October, 2020 (28 Ashoj-4 Kartik, 2077) - Editor.