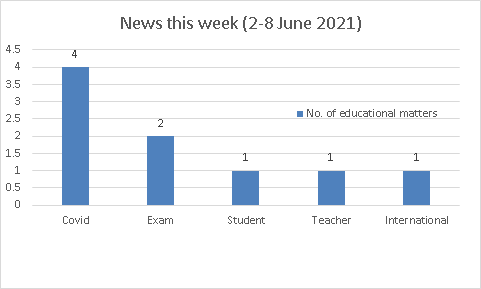 Kathmandu - This week there was nominal news regarding educational matters as the media continues to focus of Covid pandemic, budget policy and environmental constraints in the Chure region and political matters. The government’s decision to publish SEE results on the basis of internal assessment and new academic session from June 15 through alternative methods were the issues covered in the media throughout the week.
- News stated that the government has decided to publish results of Grade X on the basis of internal assessment conducted by the concerned schools. The council of Ministers decided to follow previous year’s modality for publishing SEE results, stated the news. Last year, the government had published SEE results allowing the concerned schools to provide marks to their students on the basis of internal evaluation as the environment was not conducive for conducting exams in the physical presence of students. This year, 517,000 students are preparing for SEE. The government’s move allowing schools to provide marks on their own had received flak from various stakeholders as the schools were found to have manipulated their students’ marks last year.
- Another news article stated that the Minister of Education, Science and technology has directed stakeholders to begin the new academic session of the schools from June 15 through alternative methods. However, Nepal Teachers’ Federation has urged the ministry not to take such a decision in haste. The chairperson of Nepal Teachers Federation was quoted stating that the decision to begin classes from June 15 without overall analysis of the situation is in favor of private schools only.  Though the current academic session has been extended till June 14 due to COVID-19, prohibitory order has been imposed in most districts to prevent and control the second wave of COVID-19.There is still uncertainty regarding how to run classes in the where there is no possibility of running classes through alternative method, stated the news.
- One of the international news reported a very sad incident where the remains of 215 children were found at a residential school site. News stated that the media (Reuters) had found the remains of children as young as three years old that were buried at the site of the Kamloops Indian Residential School, once Canada’s largest school. Between 1831 and 1996, Canada’s residential school system forcibly separated children from their families, subjecting them to abuse, malnutrition and rape in what the Truth and Reconciliation Commission tasked with investigating the system called “cultural genocide” in 2015, the news stated. The news highlighted that indigenous groups in Canada are calling for a nationwide search for mass graves at residential school sites after the discovery of the remains of 215 children at one former school.
- Some news reported that youths and students affiliated to various political parties have started providing medicine, food and other necessities to the poor and low-income families who are facing problems due to lockdown from Covid.
'Education this Week' is a joint effort to analyze the press coverage of education in Nepal’s selected print media published in Kathmandu. The main aim of this effort is to identify and explain major education issues picked up by the media and give back and foreground the news. This, we believe, will help policy makers and other responsible people to keep abreast with ongoing concerns and discussions on and around education. EduKhabar, in collaboration with the Center for Educational Policies and Practices (CEPP), has produced this analysis based on the news printed in Kantipur (Nepali) and The Himalayan Times (English) between 2-8 June 2021 (19-25, Jestha, 2078) - Editor.
Read this analysis in Nepali : वैकल्पिक विधिबाट शुरु हुदै नयाँ शैक्षिक सत्र
प्रकाशित मिति २०७८ जेठ २९ ,शनिबार