Call for rule of law, Government unclear about its position

Kathmandu - This week the medical education fee controversy reached its peak, with students and the private institution representative taking rigid stand while the government fails to take concrete position and act accordingly. While some college agreed to return the additional fee in a month, the Association of Private Medical and Dental colleges of Nepal warned they would not admit new students, as students appealed not to let colleges take new admission, unless the additional fees are returned. Articles and opinions appealing the government to take this threat seriously followed while student wing of the ruling partly also suggested the government to take these institutions.This week the government has been reported to be working to build Early Childhood Development Policy. The National Planning Commission has formed a Committee for the purpose.This week some news also stated that colleges in rural areas are shutting down in lack of funds after the new policy restricts local governments from any form of support to institution above school level. Previously these institutions were supported by Village Development Committees.
- Medical Students had demanded that the Medical Education Commission direct medical colleges to stop seat allocation and open house counseling until the colleges return extra fees charged from students illegally.Medical students and activists expressing solidarity with the agitating students had demanded stern action against medical colleges charging exorbitant fees from students. In response medical colleges threaten not to admit new students. The Association of Private Medical and Dental Colleges of Nepal has warned that colleges will not admit new students this year. A press release stated that the government has unilaterally decreased the number of seats in private medical colleges and fixed the fees in an unscientific way. Medical colleges can’t admit new students until the parliamentary committee on education and health issues a directive on tuition fees of medical colleges.
- An editorial titled 'Out of Control Medical institutions’highlighted that the extra fee casetestified the inability of the state to amend against the irregularities of private institutions. It further stated that Council of Ministers had made a decision on the matter a year ago, but the decision is yet to be implemented. Under District Administration Office’s coordination Chitwan Medical College agreed to return the extra fees back to the students in a period of month. A committee including the home minister, education minister among others has decided this week that the medical institutions that fail to return back the extra fee will be charged with fraudulent conduct. In contrary the Parliamentary Committee for Health and Education had concluded in support of the private institution. The editorial states that the Commission will have theauthority to write to the universities to cancel the affiliation of the institution based on the policy breach , once formed. For regulation of additional fees, Prime Minister as the Chancellor of the Universities could easily address the call from students, without waiting for the Commission it noted. 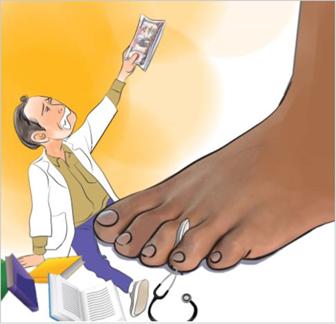 Figure: Art representing Private Medical Institution exploiting students_ KD_Sept 27
- The issue was followed by multiple incidents and articles throughout the week. An article noted that the private medical college have admitted to considerable percentage of profit( upto 32%)in previous years to the parliamentary committee, but has warned to not admit new students if the college were forced to return additional fees taken from students, as it would be unviable business. Dr. KC, a medical education reform activist has warned of fresh protest if the additional fees are not returned by the medical institutions.Student wing of the ruling political party also requested the government to take over the private medical institutions and be run by the government itself, if they admit to unable to function under the rule of law.
- An article was dedicated to the incompetency of the education minister listing the failed commitments by the minister. The minister himself was also quoted in the same news report requesting to wait for the policies to be formed before judging, stating though delayed, the policy will be formed as per the public interest and based on previous stakeholder consultations. In lack of federal education policy, local governments are in dilemma for a very long time. Education experts have started to question the ability of the ministry to form the policy and execute other works overdue. The members of the High Level National Commission on Education have publicly criticized the minister for his inability to make the draft of the committee public and doubts the recommendations will be included in the Federal Education Policy. The article mentioned the works pending to be executed are National Education Policy, Federal Education Act, making report of Higher Level National Commission on Education Public, Addressing issues of additional fees taken by Private Medical Education Institutions, Free and Compulsory Education Act draft, execution of new curriculum for school level, settling of Teachers' appointment in school level and appointment of officials in different Universities.
- A news reported that Irate students had vandalizedRautahat’s Katahariya Municipality Office, over the transfer of teachers. A meeting of the municipality had decided to transfer nine teachers, including a principal, serving at schools in the municipality, elsewhere. Dissatisfied and angry at the decision, students stormed into the municipality office, and police station as well.
The students have called on for their rights to participate in such decision that affect their lives and education. This incident points out the lack of public participation and grounded base to justify such a decision that would affect the life of students and their studies in a massive scale. The violent approach would create consequence that students may have to facepersonally. This is also the reminder that democracy is yet to be experienced by students in school’s decision making. As local and federal governments compete to assert authority over schools, student’s authority and participation as the most important stakeholder in education is yet to be recognized by the political community.
While the government had stated that skill based education will be the priority of the state, the education ministry has removed skill based education from primary level stated a news report. The representative of the Curriculum Development Center stated that considering the age of primary level students, skill based education was removed from primary level, as they should focus of basics of life skills and social values at early age, while skill based education could be covered in secondary level. An article stated that the government is all set to provide sanitary pads to girl students of communityschools free of cost throughout the country. An opinion article stated about the futile school inspections, conducted by education officials. The write shared his experience of how an inspection team just discusses with representative without even viewing the school premise sincerely. It appealed that school inspection team take a peekinto the classroom management, academic standard, teachers’ academic profile,physical infrastructure among others.
'Education this Week' is a joint effort put to analyze the press coverage of education in Nepal’s selected print media published in Kathmandu. The main aim of this effort is to identify and explain major education issues picked up by the media and give back and foreground of the news.This, we believe, will help policy makers and other responsible people to keep abreast with ongoing concerns and discussions on and around education. EduKhabar, in collaboration with the Center for Educational Policies and Practices (CEPP) , has produced this analysis based on the news printed in Kantipur (Nepali) and The Himalayan Times (English), Dailies andHimal Weekly(Nepali) betweenSept 25-Oct 1, 2019 (Asoj 8-14, 2076)- Editor.