Education has fallen behind due to weak policy decisions

Kathmandu - This week media covered on the ground realities of implementing the audio visual alternative education policy for schools. A lot of reports stated the impracticality of technology based learning for rural context.  Some news and letters also discussed about the political appointments in higher education as the major reason for the degradation of higher education in Nepal. News about distribution of text books to students was also covered this week. Private schools had appealed parents to pay the fees of student’s event during the period of lockdown. MoEST had intervened instructing private schools halt requesting parentsfor school fees against the government policy.

- A news report that students had protested appointment of IOM dean. All Nepal National Independent Students’ Union, the student wing aligned to the ruling Nepal Communist Party (NCP) had padlocked Maharajgunj-based Institute of Medicine under TU to protest the appointment of a personal physician of Prime Minister in dean’s position. Objecting to the government’s move to appoint the personal as IoM’s dean, the campus committee of ANNISU came up with the protest program to exert pressure on the authorities concerned for immediate withdrawal of the decision. A press release issued by campus committee Chairperson alleged that appointment of dean position was due to sole reason of her loyalty to the high-level political leadership. The government has violated the pact signed with renowned surgeon Govinda KC regarding the appointment of dean on the basis of seniority and qualification of aspiring candidates, the news quoted.

- Private schools urge guardians to pay fee, reported multiple news. Private school operators across the country had asked guardians of students to clear fees of the last academic year and also pay the fees of the last few months despite the fact that schools remained closed due to the nationwide lockdown. Main organizations representing private schools in the country issuing a joint statement on Sunday made the request to the guardians. The statement urged the guardians to adopt ‘live and let live’ philosophy stating that schools were having a hard time to sustain academic institutions due to the lockdown. The joint statement came despite strict direction from the government not to collect fees from guardians during the lockdown period.The organizations have argued that they were forced to collect fees as the government did not announce any relief package for them.MoEST responded with a statement instructing the private schools to not raise fees from parents during the period of lockdown. 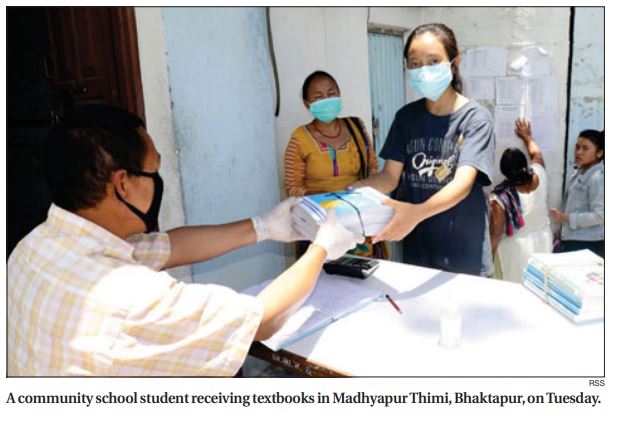 - Another news stated that the province governments where focusing on virtual or alternative education, technical education, provincial university. The news had also reported that some public schools where going to be build hostel facilities. Experts had stated that alternative learning was not a temporary thing, but a permanent way forward in the right direction. Some news reported that the alternative education was running without consistencyacross Nepal. Some news reported that the season called in the children to be in the farm so couldn’t concentrate in schooling and learning, while many where not even informed about it. This narrative that work in the field was stopping students from learning, has a bias against field work and family cooperation. It also signifies the disconnect of the education to the realities of many students specially in the rural context.
- Another news reported that the government had reopened applications for nationals willing to apply for higher education and work abroad.
- Vice Chancellor of TU was reported stating he found TU among the most spoilt institution in Nepal by political intervention, as many positions from Campus Chief, Dean, Head of Department where being filled through political appointments. The news stated that promotion was awarded to personal with history of irregularities as well.  The news had reported that though other activities of TU where halted, appointment of officials against the policy continued throughout lockdown period as well. Anothernews reported that due to delay of appointment of VC in Pokhara University future of 40, 000 students of PU remained uncertain, as learning and certification program remained halted for a long time.
- A letter to the editor stated that due to weak policy decisions the education sector of the nation has fallen behind. It stated the lack of clarity on way forward is heading the education sector into crisis. It discussed about the uncertainties of the 11, and 12 class exams. It also raised question on the how effective virtual classes could be, when the teachers weren’t able to teach properly in regular classes.
- Via-net , a private internet provider, launched its own internet learning package, E-Learning TV, this week targeting teachers and students. The package gives special time zones for faster internet, and also gave pause and play feature for television program. This would ease the learning process for students the company stated.
Innovation as a way forward has been ensured by this crisis, and this change looks like are here to stay. On the other hand, this pandemic has also exposed the depth of the crisis in our education system. The lack of relevance of the curriculum to everyday lives of students in rural setup was revealed. The inclusivity of technology based learning and its efficiency remains to be examined. As society innovates itself to grasp this situation as its opportunity, many innovative efforts are also being reported. On the other hand, the deeper impacts of crisis in higher education and its linkage to political appointment also got exposed.
'Education this Week' is a joint effort put to analyze the press coverage of education in Nepal’s selected print media published in Kathmandu. The main aim of this effort is to identify and explain major education issues picked up by the media and give back and foreground of the news. This, we believe, will help policy makers and other responsible people to keep abreast with ongoing concerns and discussions on and around education. EduKhabar, in collaboration with the Center for Educational Policies and Practices (CEPP) , has produced this analysis based on the news printed in Kantipur (Nepali) and The Himalayan Times (English), Dailies between June 17-23, 2020 (Asar 3-9, 2077) - Editor.
Read this analysis in Nepali : कमजोर नीतिगत निर्णयले पछाडी धेकेलिँदै शिक्षा क्षेत्र
Read last week’s analysis: Alternative mode of learning
All analysis read by this link : Education This week
प्रकाशित मिति २०७७ असार १२ ,शुक्रबार

If allowed to work independently, Secretary Gopi Mainali will make a great difference. This is the right position for Secretary Mainali. ..