Kathmandu - This week Politics in education topped the list in the media. There was opinion regarding positive conflict of power between People’s Representative and Government Officials, including teachers. Another opinion also suggested that the lack of political commitment in education and politics in education sector are the primary causes for present poor state of education. News was reported that the students have drawn the attention of Prime Minister Oli, who is also the Chancellor, demanding the appointment of Vice-Chancellor, Registrar and other officials at Pokhara University. Nepal Student’s Union (NSU) is alsoprotesting demanding the appointment in Kathmandu and has organized relay hunger strike in PU for few weeks been reported.  Nepali Congress extending the term of Nepal Students Union for six months heated the political scenario and many senior leaders of Nepali Congress objecting this decision was reported in headlines.

News reported that the Minister ordered to teach secondary level students about the geography and borders of Nepal from this academic session. By preparing separate reference material (book), students from class 9 to 12 are being taught subjects including boundaries.

In emergency caused by Covid-19, resumption of teaching in 51 schools of three village municipalities North Namkha and Kharpunath and Tanjakot villages in the south of Humla was reported. The village municipality has decided to run the school saying that the fear of corona infection has decreased. Schools in Humla are also teaching on Saturdays to complete the course. Community schools in Karnali have adopted various alternative methods to continue learning in the epidemic of Covid-19. Megha Secondary School was awarded as the best community school of Nepal and it is doing well in both offline and online classes.There was news covered which stated, ‘Free sanitary pad for community school girls in Kathmandu metropolis’.

However, a news report was about the schools of Bhajani Municipality, Kailali District used as Shelter for flood victims. Even that school is flooded and victims are kept in the upper floor of the school building.  It is a good idea to bear emergency shelter function of the school while constructing and give it a multiple use function.

The cabinet instructed to the Ministry of Education, Science and Technology for running new academic session from 17th August, facilitating educational activities of the schools by following public health and safety standards. The government also instructed schools not to use as a quarantine or isolation centers. There was also advertisement from the Human Resource Development Center of MoEST informing about audio and video lessons, progress and time to be spent by teachers in teaching evaluation of textbooks, call of proposal for lump sum grants for model schools on 31st July.

There was news on a decision made by the MoEST to apply minimum package prepared under the National Early Grade Reading Program (NEGRP). This includes Nepali curriculum for grades 2-3, teachers' guidelines for it, its students practice book and management of other educational materials. These can be directly taken from JEMC or can be printed through the Municipalities. It also instructs to follow integrated curriculum for grade 1 as provided by CDC.

News on private education also recorded third in the list. News regarding Ncell new data packagefor student's in coordination with HISSAN, PABSON and N-PABSON. There was also a news regarding lack of time limit, proper guideline and supervision conducting online classes in private schools.News was reported on Nepal Parents' Federation demanding not to force them to pay for unattended months.An expensive fee in education taken by Nepal Army was also reported. 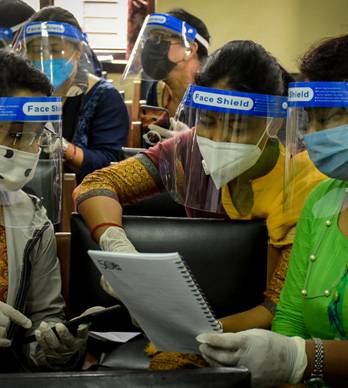 Education photo of the week: Teachers of a government school participating in a workshop to learn how to conduct online classes effectively for students while schools are shit to break the chain coronavirus transmission, in Lalitpur. August 1_2020_THT

There was news on Teacher’s Federation of Kapilbastu District demanding PCR tests of Teaching Staffs. Another news reported the Nepal Teacher’s Association has locked the Thakur Baba Municipality demanding right to choose their transfer themselves and cancelation of rule brought by Municipality regarding teachers transfer.

The media reported Nepal Teachers’ Association expressing grief over the indifference and helplessness shown by the government without drafting the Federal Education Act for such a long time after the promulgation of the new constitution in the country, the association has strongly appealed to the government to end the educational chaos and confusion by issuing the Federal Education Act.

Other news this week were: the consultation for the establishment of Yogmaya University, training to government teachers to operate schools in COVID situation, and KMC’s decision to introduce local curriculum till grade 10. There were some follow-up news and letters discussing about the impracticality of TU’s decision to take exams due to the fear of Covid-19.

News reported a virtual dialogue on School Re-opening Directive in which experts had stated that the rights to take a decision to open schools should be given to local governments, school management committees, and schools.
The Procedure and decision to open schools can't be taken only by the Central Government. The Local Governments are in a better position to make appropriate decisions on the matter. Even in general situations, local government and school Management Committees should have more authority to link the necessity and reality of their society to determine what and how the school should be run to meet their needs.

'Education this Week' is a joint effort to analyze the press coverage of education in Nepal’s selected online and print media published in Kathmandu. The main aim of this effort is to identify and explain major education issues picked up by the media and give back and foreground of the news. This, we believe, will help policy makers and other responsible people to keep abreast with ongoing concerns and discussions on and around education. EduKhabar, in collaboration with the Center for Educational Policies and Practices (CEPP) , has produced this analysis based on the news printed in Kantipur (Nepali) and The Himalayan Times (English), Dailies and online news portal SetoPati, NayaPatrika and The Republica between 29 July- August 4, 2020 (14-20 Shrawan, 2077) - Editor.

How can teachers, parents and students be benefitted if they use laptop instead of mobile phones?..