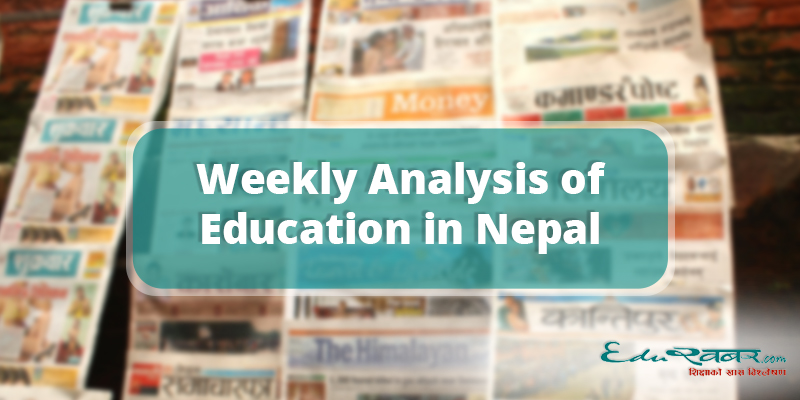 Kathmandu - This week the articles published dominated the issues of education in the media. They covered diverse issuesof education and consisted of deeperanalysis of the subjects they raised. It included mostly of policy debates, news and opinions about the private school related policy at school level and of medical education as well. Below are the five most noted education related matters in the media this week.

1.    The most noted matter this week was the report covering the proposals of the High level Education Commission and the followed up news, opinion articles and letter to editor it generated. The High level education commission’s proposal consisted of suggestions that could change the face of public education and the direction of the school system. Those proposals were taken very seriously and could be seen in the papers throughout the week. The issue of private schools, the rights of the local governments, the right of learn in mother tongue were some of the issues that the High level education commission’s report brought to light. The High Commission on Education was also reported to have recommended ensuring mother tongue to be the language of instruction till class eight.

2.    The most noted opinion article this week was written by Parliamentarian Radheshyam Adhikari commenting on the High Level Education Commission’s proposal to convert  for-profit private schools to nonprofit onesin 7 years. The article argued about the cost of such a proposal and questioned the capacity of the government to handle it. He argued that instead of blaming the private schools for the degradation of public schools, the political leaders should take the blame for politicizing public schools. In his opinion the bureaucracy should also take the blame for the failure of effective monitoring of public schools. He also argued about the right to such decision is in already handed over to the local governments by the constitution.

His views are likely to be contested and come at the time where matter in favour of private schools coming in the form of editorials, news analysis, opinion articles.  The Parliamentarian noted for his intellect and noted voice in favour of public education has such views.  Although he is said to have spoken in the parliament about anomalies of education, he was not so outspoken on the matters of giving permanent status to most temporary teachers irrespective of their needed qualification for example.  His writings portray him to be a naïve witness of the private education lobby being in the driver’s seat in many forums to influence policy or he is also swayed by the same influence.

3.    The local level governments took stand that the right to formulateeducational rules and regulations remained in the hands of local level as per the constitution, stating that the federal government’s notice to prohibit to formulate education rules and regulations by the local level was against the Constitution. The matter was well followed in the media with news and letters defending the rights of the local governments ensured by the Constitution.Such discourse will help clarify the limits, roles and responsibilities of the three tier government system that is still experimenting with the practice of power.

4.    A news of the launch of ‘A day in school classroom’ campaign, to encourage parents to be present in public schools to share their experience by chief minister of province 5, was aninnovative approach to bring public attention to bring hope about the better future of public schools. Series of opinion articles raised the issue of public school’s crisis, stating the impact of politicization of the public schools as the main cause to its degradation. One sincerely can hope that it does not remain a political stunt.

5.    Dr. KC’s preparation for the 16th hunger strike for Medical Education Bill and the debate and arguments about the medical education policy between the ruling and the opposition parties was a regular matter carried by the media this week.

While there was an expected struggle between the ruling party and the opposition party in the issue of medical policy, it is important to understand that this is the most consistent struggle of an independent citizens’ movement for the cause of education policy in the so far recorded history of Nepal. Its impact in the overall direction of the future of education in Nepal has not been realized, while it could arguably be the most prominent attempt to take the nation towards a socialist future. The news of the policy recommendation to turn all private medical colleges into not-for-profit institutions in next 10 years, comes along with the High Commission on Education’s suggestion to turn private education institutions into nonprofit in 7 years.

There were multiple news of corporal punishment practices in different schools and fetalincident caused by it which were well followed.New curriculum to address social crisis of Chaupadi (exile from house foruntouchability at the period of mensuration) was an appreciable attempt.

'Weekly Analysis of Education in Nepal' is a joint effort put to analyze the press-coverage of education. The main aim of this effort is to identify and explain major education-issues picked up by the media. This, we believe, will help policy makers and other responsible people keep themselves abreast with the ongoing concerns and discussions on education. Edukhabar, in collaboration with Center for Educational Policies and Practices (CEPP) , has produced this analysis based on the news printed in Kantipur (Nepali) and The Himalayan Times (English) from Dec 29, 2018 to Jan 4, 2019. - Editor.