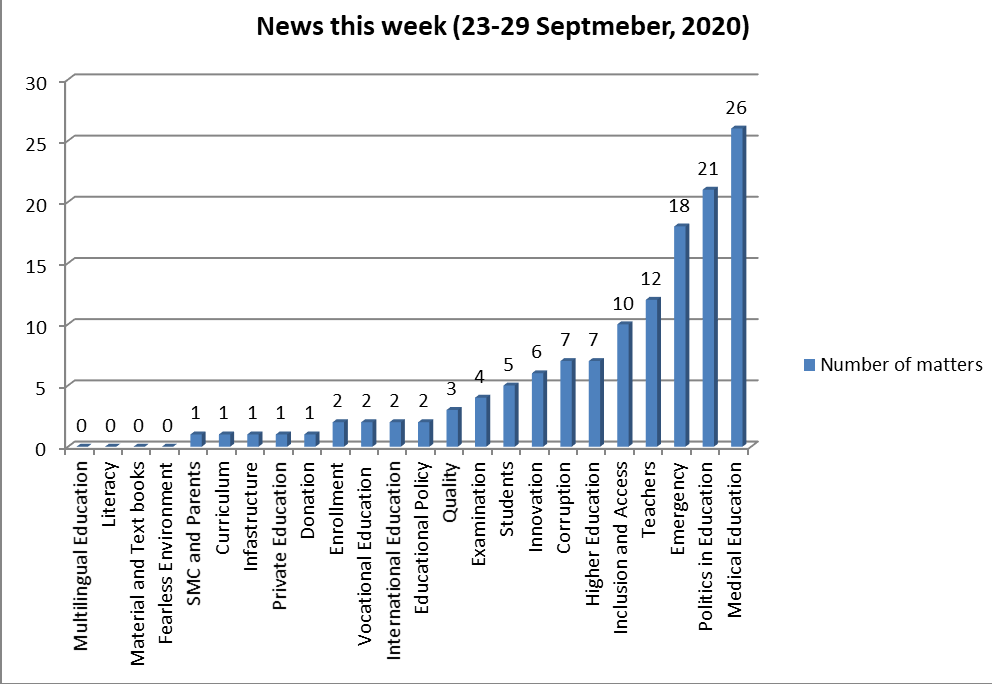 Kathmandu - This week the most covered news next to medical education was centered to the physical reopening of schools in taking different safety measures amidst the concerns by parents and children. The most covered news took on the 'Satyagraha' (non-violent resistance that includes fast on to death) by Dr. Govinda KC with the news, articles, photos and videos and letters to the editor criticizing the government’s lack of response  while support from different sectors of the civil society as Dr. KC’s health deteriorates .

Multiple news stories about schools in different regions of Nepal opening physical classes due to the lack of effective digital alternatives were carried by the media. The news reported that Municipalities of Tanahun, Bardiya, Kailali, Siraha, Lamjung, Taplegunj, Kavrepalanchowk, Kathmandu, Baitadi, Khotang and Argakhachi districts are opening schools, allowing schools to collect fees and enrolling new students by maintaining the Corona health protocols following the Guidelines issued by MoEST. However, the media reported that there is still confusion among Municipalities in choosing an alternative method of learning and responsibility on students' safety from the Pandemic.

In less than a week after the Municipalities decided to run the school, the CDO of Lamjung district asked not to open the school until further notice and schools of Purnachaudi Municipality, Baitadi district that opened after lockdown were closed due to the death of a person from Covid-19, according to the media.

In the meantime, MoEST has urged to prioritize alternative learning system over opening schools as the risk of Covid-19 continues. It has instructed teachers to attend their respective schools as the 'Contingency Action Plan on Education-2077' was enforced, reported the news. Ministry has created CUG (Closed User Group) with Nepal Telecom to ease the communication between teachers, students and the parents for online learning by providing free SIM-card with unlimited voice pack, bulk SMS and data (monthly charge: Rs. 99).

An article suggested that by combining virtual and direct teaching methods, major impact on student learning from the Pandemic can be alleviated. Another article discussed how Covid-19 uncovered faults of education policy focused only on urban students. Yet another article and letters to editors discussed the lack of effectiveness of so called alternative learning methods at school level due to the lack of clear directives for execution. TU has decided to conduct its postponed examinations for the Pandemic after 'Chhaith' festival, reported the news. However, it likely that rate of infections of Covid-19 cases can affect the decision.

Although responsibility of running basic education has been constitutionally transferred to the Municipalities, there is a serious lack of coordination among the three levels of Government. There is still ambiguity in many service delivery systems. While the Government has hiccups in letting the lower tiers of the Governments, we can find intervention of the Federal Government even in the matters of exclusive rights has created dependency. Municipalities must not be hindered to exercise their authority on school education bestowed by the constitution and the safety of students.

An article provided suggestions for TU to improve the quality of PHD and graduate programs, end of political maneuvering, infrastructure management, end of nepotism and favoritism and raising the standards of qualifications and students’ abilities. VCs of the University of Agriculture and Forest Sciences and the Sanskrit University were appointed by the Governmnet, the news stated in the media. As it was vacant for long, daily educational activities were affected. Still many more positions of different Universities remain vacant.
Under pressure from various concern groups, the Biratnagar Metropolity has postponed examination for grade 11 scheduled to be held from October 1, the news reported. The Ministry for Health was reported instructing the private medical colleges to include the asymptomatic students in the examination without PCR test after the private medical colleges made the PCR test compulsory for participating in the examination. Cost of PCR stands at Rs 2000/test.

As Dr. KC's Satyagraha continues from TU Teaching Hospital, the Government seems indifferent to his health and demands. The Government still has not shown any sign of holding a dialogue with him, a headline reported. NSU affiliated with main opposition Nepali Congress Party, Bibeksheel Party, member of the Civil Society and NHRC expressed solidarity and have drawn the attention of the Government to show status of the implementation of the agreements reached with Dr. KC to the public. They also reminded the Government to be sensitive towards the life of Dr. KC, the various media reported. The Solidarity for GKC Alliance and doctors were reported staging protest in Kathmandu and in different parts of country every day since the Dr. KC was brought to Kathmandu. Seventeen supporters of Dr. KC were arrested from Maitighar Mandala who later filed a complaint against CDO of Kathmandu and Chief of Metropolitan Police Range, Teku at the NHRC as no reason for their detention was given, according to Solidarity for GKC Alliance. Many criticized the police brutality. Another news headline stated that Dr. KC has urged the PM Oli through a video message to fulfill the demand without any suspicion as they are ordinary demands. The doctor involved in the treatment was reported saying that he may have to be rushed to an ICU at any time.

Corruption in Medical Education was all over the media this week. Appointments of the people close to him and to manipulation of the tender procedure for the procurement of medical equipment by the VC of BP Koirala Institute of Health Sciences (BPKIHS) were reported in the news. .The head of procurement branch of BPKIHS claimed that he was transferred to another department as he didn’t work in favor of VC Gyanendra Giri. Senior doctors and teachers of BPKIHS were reported protesting since Thursday demanding dismissal of the VC.

Everest College of Nursing raised an additional Rs. 3,00,000 from Bsc. Nursing students, the news stated. News further stated that the Medical Education Council has drawn serious attention and expressed its commitment to stop the corruption by determining the fee for the nursing program for upcoming academic session. More to this, the media also reported that the physicians are in agitation besieging the Medical Education Commission's office in Sanothimi since Sunday demanding increasing proportion of open seats in PG/MD courses.

A front page news the PM halting the distribution of the self-study material on 'Nepal's territory and borders' on Nepal’s history of the boundary that includes Limpiyadhura – an area claimed by Nepal under Indian control issued by CDC for grade 9-12  baffled the public. NSU was reported demanding the distribution of the book. Earlier after a long discussion in all political fronts, the Government had issued its new map incorporating the disputed land.

Other news in the media included: Thirteen student organizations, including ANNFSU and NSU, demanding the repeal of the 50% fare hike in public transportation by the Government; The Province One Government training 600 teachers in IT  in partnership with six Municipalities for the improvement of education quality; CIAA taking action against 7,613 permanent teachers for not submitting their property details; the United States has proposed a law banning visas for students from 59 countries, including Nepal,; Out of 753 Municipalities, 637 have opened technical schools ; head of Babai Campus, Bardiya infected with Covid-19 died while undergoing treatment in Nepalgunj; Six NSU activists have been arrested by the police for demonstrating in front of the Chinese Embassy on the recent border dispute between Nepal and China; NSU and ANNFSU have staged protest at the Bajhang district headquarters Chainpur demanding an impartial investigation of a rape case; three persons, including the head of Kavre Multipurpose Campus have absconded after students and parents lodged a complaint of fraud for enrolling students in computer engineering in grades 11 and 12; the Governmnet has decided to relocate two schools - Basic Model School and Central Deaf Higher Secondary School, in the premises of the Nepal Children's Organization in Naxal, Kathmandu; and, story of a father who schooled his children to post graduate level by selling tea in Dhanusha district.

'Education this Week' is a joint effort to analyze the press coverage of education in Nepal’s selected print and online media published in Kathmandu. This week, reports included online portals SetoPati, NayaPatrika and My Republica. The main aim of this effort is to identify and explain major education issues picked up by the media and give back and foreground of the news. This, we believe, will help policy makers and other responsible people to keep abreast with ongoing concerns and discussions on and around education. EduKhabar, in collaboration with the Center for Educational Policies and Practices (CEPP) , has produced this analysis based on the news printed in Kantipur (Nepali) and The Himalayan Times (English), Dailies and online news portal SetoPati, NayaPatrika and My Republica between 23-29 September, 2020 (7-13 Ashoj, 2077) - Editor.