Kathmandu -  This week's news focused on the issue of political pressure by the Prime minister and the Education minister to grant affiliation to a private medical college that does not meet the requirements of the law. Shutdowns of private schools after preference over public schools was also reported in the media. Other news on preparation for exams at different levels as lockdown loosens, and disasters like flood and erosion across Nepal impacting school infrastructures were covered in the media. 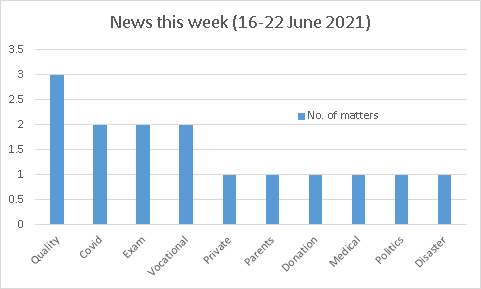 - News stated that as many as 12 former vice-chancellors of Nepal’s universities have written to Prime Minister KP Sharma Oli and the education minister asking them to maintain the dignity of the Medical Education Commission’s vice-chairman’s post and autonomy of universities. The letter states that the MEC has been pressured to grant affiliation to B&C Medical College which doesn’t meet MEC criteria. On May 14, Kathmandu University had recommended the MEC to grant affiliation to the medical college. Officials of the Medical Education Commission, on the other hand, say that B&C cannot be provided affiliation since it has not renewed its letter of intent approved five years ago, stated the news. Former vice-chancellors have expressed concern about threats issued to the vice-chairperson of the MEC. They added that they would hold the government responsible if any harm was done to the personnel. They have also accused the government of interfering in the functioning of autonomous universities. News further stated that the Health Minister has directed the MEC to submit a file to the PM regarding the decision to grant affiliation to B&C Medical College and Teaching Hospital. Picture of view of Terse Secondary School, which is at high risk of being swept away by the floods in the Melamchi River, Sindhupalchowk, posted on the front page of The Himalayan Times on 19th June 2021.
It was noted that the schools are mostly at risk of natural disasters like flood or erosion as the monsoon approaches due to placement of schools in inappropriate sites. Land donated for schools in many cases are inappropriate lands with lower value away from settlements, thus in areas with higher risk of natural disaster.
- News stated that private boarding schools have gradually started closing down as the quality of teaching and learning in rural community schools has improved. Some operators have even closed boarding schools themselves and transferred students to community schools. The director of Child Learning English Boarding School of Baktiya rural municipality-3 in Hattisudhe was quoted as saying after the English medium education started in the village community school, the boarding school was closed and the 101 students from nursery to class 4 were handed over to public schools. News also stated that the management of community schools were also improving. Parents and other stakeholders were mentioned commenting that the change has taken place as the local levels have started supporting the community school in various ways from the physical infrastructure to the quality of education.
This news report signifies the benefit of federalism in the education sector. As the responsibility of schools were handed over to the local governments, local governments have attached their dignity to the status of public schools, thus much needed attention and government funds have been dedicated to schools. This has helped innovation in school and municipal level across the country. On the other hand, the case of English as the indicator of quality education, will need sincere intervention.
- News stated that educational institutions are preparing to resume examinations that were suspended due to the lockdown after the declining of Covid cases. Preparations are underway for conducting various examinations including university, medical education and class 12, stated the news. It also mentioned that if the situation becomes normal, class 11 examinations can be conducted till mid-July and class 12 examinations by mid-September.
- News stated that the Ministry of Education, Science, and Technology and Korea International Cooperation Agency have signed a Record of Discussion for the project ‘Establishment of Polytechnic Institute for Construction Workforce Development in Province 2, Nepal’. The Korean Government, through KOICA, will spend US$ 8.6 million for this project, the news stated. The project period is for seven years beginning 2021. The project will be implemented by KOICA and CTEVT at its polytechnic institute in Bardibas, Mohattrai.
- Another piece of news stated that parents and guardians in Tanahun can be seen queuing up at book shops in the district headquarters Damauli with the beginning of the new academic session. Gandaki Book Shop owner was quoted stating that the textbooks of some grades are yet to arrive as they had to be revised and updated.
- An opinion article expressed the concerns on the challenges of alternative learning methods. The writer also mentioned that the online teaching method is expensive in itself and the computer, laptop or smartphone required for that is an additional expense. The writer further suggested that in order to make online learning effective, it is necessary to use learning with audio-visual content (story, short film, documentary, etc.), student participatory learning method, etc. that will increase students' interest in learning.
'Education this Week' is a joint effort to analyze the press coverage of education in Nepal’s selected print media published in Kathmandu. The main aim of this effort is to identify and explain major education issues picked up by the media and give back and foreground the news. This, we believe, will help policy makers and other responsible people to keep abreast with ongoing concerns and discussions on and around education. EduKhabar, in collaboration with the Center for Educational Policies and Practices (CEPP), has produced this analysis based on the news printed in Kantipur (Nepali) and The Himalayan Times (English) between 16-22 June 2021 (2-8 Asar, 2078) - Editor.
Read this analysis in Nepali : सम्बन्धन दिन आयोगलाई दवाव
प्रकाशित मिति २०७८ असार ११ ,शुक्रबार