Chaotic Consequences of Covid in Education 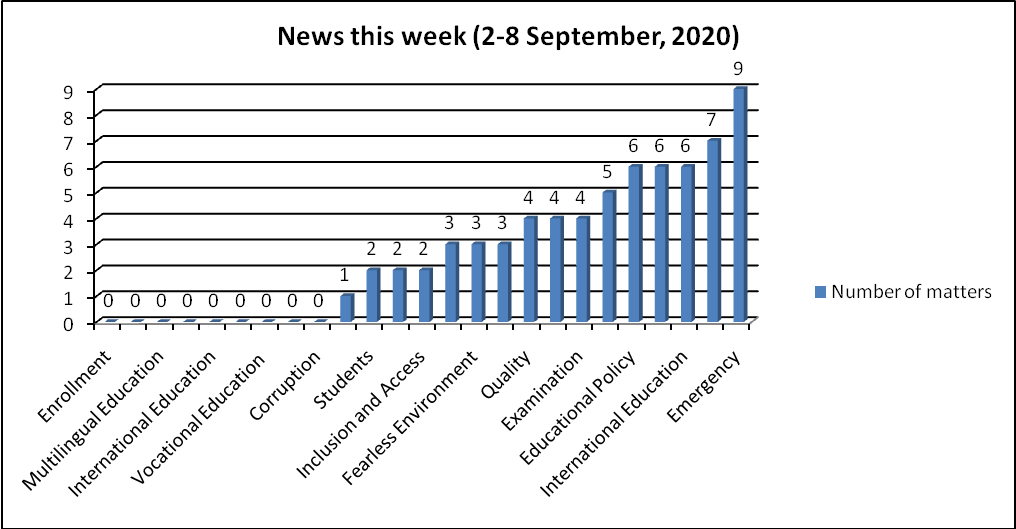 Kathmandu - The chaos of Covid-19 continued to be felt this week. The news on Govinda KC temporarily putting off his postponed'Satyagraha'(non-violent resistance that may include fast on to death) on a special request of people of Jumla district was followed by the media although not mainly caused by Covid-19. The media reported the demands that included: the launch of an MBBS program in Karnali Academy of Health Sciences with necessary infrastructure and the workforce, running post-graduate classes in the Gita Medical College (under construction - located in Kailali) and Rapti Academy of Health Sciences (located in Dang) and amendment of the Medical Education Act.Allegedly, they have not been allowed to run under the PM’s instructions. The news also reported that the Government has recently issued'National Medical Education Rules-2020', enabling educational institutions to establish and operate medical colleges.

The news reported that NEB is preparing to conduct 12 examinations in 3 phases; first phase in mountain districts and school having only 50 students in grade 12 before the Dashain. It was not reported what were the two other phases. The Far-Western University to take exams of Bachelor's and Master's online on September 28 and onwards following 'Examination Operation, Management and Evaluation Directive, 2077' issued by the University.The news on Purbanchal University's 'Time Bound Home Exam' process was reported.

A headline reported that the MoEST has modified the Directives for Alternative Learning and formally recognized the alternative method like radio program, TV show, learning centre, distance education and virtual classes run by schools with this academic session.MoESThesitated to recognize this before. The news further stated that the Government has decided to customize the curriculum of school education (class 1 to 10) to cover the contents for the academic year in 6 months.

The news reported that Prime Minister held discussion and consultation with psychiatrists to build the society free from frustration, anxiety, fear and panic in Baluwatar on Tuesday. Last week, the news showed the trend of mental stress of isolation among children in the country. Minister of Law, Justice and Parliamentary Affairs was reported addressing that the Government is also working on including informative materials in school level curriculumabout violence against women and children.

During this pandemic, two rape cases of student by teacher were reported in the media. In the first case, 15 year school girl was raped by her teacher in Salyan district and the news further reported that the teacher is fled and now the girl is also missing. In another incident, two teachers of Sigass Rural Municipality, Baitadi district were accused of raping and impregnating another school girl. The accused were reported roaming free even after the victim filed case against them in the Police Station.  An article raised the need for counseling students about relationships among teenagers, about cyber harassment, sexual harassment, safe sex, abortion, contraception, and consent. A separate body where students can file complaints against harassments and wary parents to discipline their children was also felt needed.

During the emergency situation in education, the news reported that the Ministry of Finance was reported receiving 10.85 million Dollars in grant for the access of students in basic education during the pandemic from the World Bank. The MoEST planning to provide access in technology for virtual learning by locating needy students with the help of Local Governments was reported. The news further stated that Rs. 6 billion was allocatedin the President's educational program but wasn’t sanctioned which didn’t make to the MoEST.
A series of discussionsamong the government officials, educationists, Teachers Federation, CSOs and journalists on 'Bagmati Provincial Education Policy-Draft'were held in the week by a couple of organizations. The one organized by Education Watch Group, Nepal was reported in the media. They put emphasis on Lifelong Learning Education. CEPP also provided feedback on the draft that was carried by EK.

In the media, during a discussion of Education Sub-committee under the Education and Health Committee of the Parliament (ESC), MPs were reported saying that teachers, various organizations, party cadres should be mobilized to control the Covid-19 and were reported requesting Local Governments to locate people engaged in educational sectors to mobilize them as volunteers. The news reported that the MoH and different medical institutions have agreed to assign medical students as volunteers to control and prevent Covid-19.

In the meantime, principals of 30 public schools out of 36 in Chaurjhaari Municipality (West Rukum District) were selected through an examination under the provisions created by the Municipality Education Act was reported in the media claiming it taking place for the first time. Municipality also has set up the prize and punishment system for the principals.

MoEST has been ordering all the teachers to reach out to the students – the media reported. This is not for the first time that MoEST has issued such orders. Many a times, it orders and teachers do not make to the school. Although responsibility of school education rests with Municipalities under the Constitutional provisions, there is big ambiguity about the management of teachers as the local bodies are not given authority to hire and fire teachers. Federal government has not been willing to unleash their power in this regard under the pressure of teachers’ unions. Also this time, it authorized to decide Municipalities to or not to start a school; it was not explicit to tell teachers to follow the orders of Municipalities. Only handful Municipalities who have guts and ideas to promulgate its own act and feel the power of people (as illustrated above) are able to manage them. Until this issue is resolved, MoEST continues to give orders and teachers continue to disobey. Nonetheless, legitimate demands of teachers for their safety needed to be met by the concerned.

Other news of the week are:Healthy competition of Tele-communication giants Ncell and NTC to provideonline access for students;Full scholarship for MBA to the former captain of national cricket team; grade 11 and 12 full scholarship application forms opened till September 23 for 10 SEE students by B1 Group(a private company as a part of their CSR), Sirbaare Basic School of Galkot Municipality-7, Baglung district where only Dalit students study, non-Dalits don't get admitted; N-PABSAN, Karnali in Karnali province handed over locks and keys to the Province Government stating not being able to run the school;Socialist Student Union demanding to withdraw the inflated price of petroleum products;All Nepal National Free Students Union leaders drawing the attention of the Minister for educationto make alternative learning more effective, conducting postponed exams through alternative methods and implement a new curriculum for Grade XII;Surrender of two student leaders of BiplabGroup (extremist dissident fraction of the Maoists) in DAO, Sindhuli and idnapping a principal in Sindhuli.

Being responsive to the context is one of the primary lessons one should learn to be more prepared for the future challenges. The delay in response by the Government shows the lack of ability to cope the chaotic education system. However in many sense, the centralized education system that causes lack of the institutional capacity to be responsive to situation can be a contributing factor. With federalization of school systems, hopefully the school will be more responsive to situational needs and thus become a place to better learn and grown for students. There is also need of active to monitor public and private teachers and Local Government.

'Education this Week' is a joint effort to analyze the press coverage of education in Nepal’s selected print media published in Kathmandu. This week, reports included online portals SetoPati, NayaPatrika and My Republica. The main aim of this effort is to identify and explain major education issues picked up by the media and give back and foreground of the news. This, we believe, will help policy makers and other responsible people to keep abreast with ongoing concerns and discussions on and around education. EduKhabar, in collaboration with the Center for Educational Policies and Practices (CEPP) , has produced this analysis based on the news printed in Kantipur (Nepali) and The Himalayan Times (English), Dailies and online news portal SetoPati, NayaPatrika and My Republica between 2-8 September, 2020 (17-23 Bhadra, 2077) - Editor.