Grade 11 Curriculum in Limbo in the Court Yard !

Kathmandu - This week the news on the continued delay in the court's decision on implementation of a new curriculum for grade 11; the results of the grade 12 exam to be made public in the first week of Magh were reported. The National Examinations Board was reported to start preparation to conduct the examination of Grade X (SEE); selection process for Vice Chancellor of KU; challenges to access schooling of marginalized Badi Community was also featured in a dedicated article. 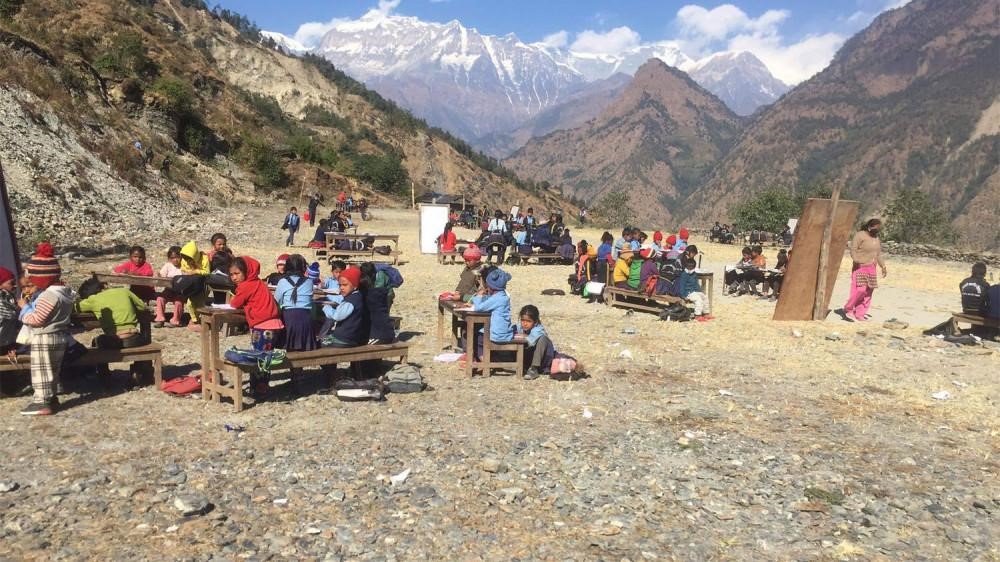 Figure 1   A pictorial report of Children of Kisani Secondary School of Dhaulapani Rural Municipality-7 Dharapani of Myagdi District studying in the open field after the school was damaged by floods and landslides six months ago was covered in the front page of Kantipur Daily on 2nd January 2021. While it's not a bad idea to teach children in the open when the sun is shining instead of cold and dark rooms, some interim provisions could be made with tents and or makeshift schools. Often such incidents make an excuse not to teach. It looks like that’s not the case here. We can hope that teachers won’t miss to appreciate how beautiful the location is for children and themselves!!

- National Examinations Board was reported to start preparation to conduct the examination of Grade X, also called Secondary Education Examination (SEE), of the current academic year from mid-May, reported the news. The NEB, for the purpose, has also asked all the schools in the country to register the names of Grade X students. While the examination authorities have started preparation for the final exam, it has largely overlooked the fact that schools have remained shut for around nine months due to the COVID-19 Pandemic and students have not been able to study like in the previous year.

- An editorial suggested that despite  many hurdles, the NEB must not renege on its resolve to hold the SEE. It stated that the government’s decision to hold SEE, from mid-May should put to rest any doubts about whether or not students will have to sit for the exams this year.   It also stated a concern that NEB cannot afford the risk of losing a whole academic year, while on the other hand it does not know how to provide a level playing field for all students, regardless of where they live and what their economic status is.

- Other news reported that schools that remained closed due to the coronavirus pandemic are now gradually coming into operation after months. Schools had shut their operation though the educational session started some nine months back. The schools now have started operations to complete the curriculum on time after teaching and learning became easier, the news stated.

- The Vice Chancellor Ram Kantha Makaju, accused of irregularities in Kathmandu University (KU), is in the race of becoming the Vice Chancellor for the third time was also reported. It also highlighted that he was into controversy already in his first term for illegally giving associated with a medical college. He has been accused of embezzling university funds in his second term. Professors and staff agitated against the move, resulting in a halt in teaching for months. Dissatisfied with his working style, some professors and staff have left the University and some are said to be in the process of leaving.

- A news article stated that the complexity of corona epidemics should be taken into account when implementing a new curriculum. At present, new curriculum implementation of class 11 is on hold in court. Government cannot take a decision when a matter is in the court, it stated. If the Ministry of Education had been serious about this sensitive issue in time, there would not have been such a confusion the news stated. In the same academic session, some students are studying under new and some under old curriculums. The Hearing of the issue is postponed in the Supreme Court for another week. Stakeholders are concerned that the delay risks the loss of the academic session. A letter-to-the-editor raised the issue of this delay as there are only 5 months left till the end of class 11 academic session.

- A dedicated article discussed about children of the Badi -a marginalized community of Nepal for not being able to continue education due to financial limitations. It shared that children are compelled to start earning early than to continue schooling.

- Yet another letter- to- the- editor stated that virtual classes should be the ‘New Norm’ rather than COVID-19 aberration. The world is going virtual, it claimed virtual learning is much more productive than classroom learning.  For Nepali of all ages across the economic spectrum, virtual education is the way to go, it proclaimed.

Another letter to the editor stated that the life skills and hygiene courses have been limited only to text books and yet to be applied in everyday life. It stated that there is a need for reform in education in order to make children creative for a balanced life in the society.

- The news of reopening of schools after Covid pandemic in Great Britain was also reported in the media. Another international news stated that Hong Kong extended its suspension of face-to-face school classes until mid-February, with the spread of the coronavirus in the Asian financial hub remaining ‘critical’. Schools in this Chinese territory have been mostly shut for a year, with many having switched to online learning and lessons by conference call.

'Education this Week' is a joint effort to analyze the press coverage of education in Nepal’s selected print media published in Kathmandu (Online scanning was stopped due to the shortage of staff time from this week on - apologies with the readers. The main aim of this effort is to identify and explain major education issues picked up by the media and give back and foreground the news. This, we believe, will help policy makers and other responsible people to keep abreast with ongoing concerns and discussions on and around education. EduKhabar, in collaboration with the Center for Educational Policies and Practices (CEPP), has produced this analysis based on the news printed in Kantipur (Nepali) and The Himalayan Times (English) between 30 December, 2020-5 January 2021 (15-21 Poush, 2077) - Editor.

Kathmandu - This week the news on the appointment of Agriculture and Forestry University (AFU)’s major positions; public call for the post of Vice Chancellor (VC); student unions’ involvement in protests; opinion article on expectation of long term impact in pedagogy by Covid and announc.....