COVID matters : Increase in spread of the virus across the country !

Kathmandu - This week increasing risks of spread of COVID-19 among educational institutions across the country was reported the most. News as educational institutions shut down for four days due to increase in air pollution was also made in the front news of the media. The issue of physical punishment by teachers making a fearful environment among students in school continued this week. Other news included uncertainty of 14,700 teachers for appointment and promotion, regular strikes in Midwestern University, and 141 nursing colleges do not meet the criteria. 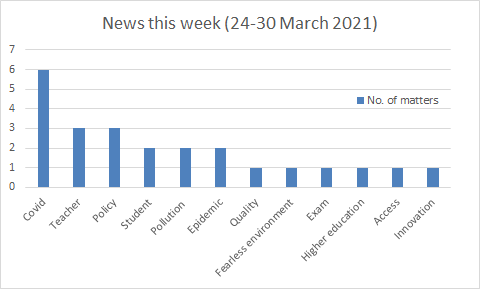 Increase in Covid cases among students across the country
- News stated that the Ministry of Education, Science, and Technology has asked all the schools to avoid crowds and strictly abide by public health and security measures after the increase of spread of COVID-19 in the community in a press release. As stated in the press release, the schools must follow the ‘School Operation Framework, 2021’ and not conduct any assemblies, functions, anniversary celebrations and other events and activities involving crowds and gatherings.
- News stated that the examination of first, second and third year of the undergraduate level at Paschimanchal Campus (Institute of Engineering Studies), Lamachaur, Pokhara have been postponed due to corona infection in the students. Similarly, COVID-infected students participated in the fourth-year undergraduate examination of Paschimanchal Campus, stated another news. According to the campus, the examination was conducted by maintaining physical distance between the infected and others in separate buildings and rooms.
- The spread of COVID among students in various schools of Kathmandu valley was also reported in the media. The news further stated that with the increase of spread of Covid infection across the country, National Private and Residential Schools Organization Nepal (NPABSON) is going to emphasize on alternative teaching and learning. For that, the member school will have to create a reserve fund of at least 0.5 percent of the total monthly income.
- Whereas, a piece of news reported that about 300 students of Navdurga Basic School in Dhitah, Narayan Municipality-5 here have fallen ill while the PCR tests of 30 students were negative. The school has been closed after students have been getting sick. Similar news was reported at Dhuralasain Secondary School located at Budhiganga Municipality, Bajura, where more than 200 students have fallen ill.
Air pollution across Nepal causes educational institutions shut down
- Multiple news were covered in the media stating the MoEST has ordered all educational institutions in the country shut for four days, as air pollution has reached hazardous levels across Nepal. The ministry, however, clarified that schools and colleges that were conducting examinations could continue with exams.
These kinds of events are very alarming to the environmental issues we are facing. Though such pollution hazard holidays were heard from India and China, this was the first time, air pollution was regarded as an emergency to declare holiday in Nepal as well.
Fearless Environment
- A piece of news stated that students of Buddha Academy Boarding School in Naya Basti of Gokarneshwar Municipality have been beaten by the principal and hostel in-charge for failing the examination. One of the students who was injured due to the beating is undergoing treatment at Kathmandu Medical College in Sinamangal, stated the news.
Politics in Education
- A news piece reported that the process of appointment and promotion of the posts of about 14,000 permanent teachers has become uncertain as the government has not appointed officials in the Teachers Service Commission for the past six months. The government has not been able to make appointments even after the recommendation committee recommended the names of two members including the chairperson. The problem has arisen due to the negligence of the Education Minister. It is estimated that there is a shortage of about 58,000 teachers in community schools. The news reported that under the direction of the Education Minister, Education Secretary had written a letter to the Public Service Commission to reconsider its recommendation and evaluation. The commission as reported had sent a reply letter to the Ministry of Education, saying that the Minister of Education had acted "forcefully" and would not change its decision.
- News stated that students at the School of Law and the Central Campus of Engineering under the Midwestern University (MU) have been on strike for nearly three weeks. The students have alleged that the question paper was leaked by the teacher in the entrance examination for the new admission of BA / LLB academic session 2077/78 under the School of Law.
Policy matters
- News stated that 141 nursing colleges do not meet the criteria as per the provisions of the Medical Education Act. Ninety private nursing colleges affiliated to the Council for Technical Education and Vocational Training (CTEVT), 43 affiliated to Eastern University and eight affiliated to Pokhara University will close if they do not meet the criteria, stated the news. The Act stipulates that a 100-bed hospital should be mandatory to run a nursing college.
Other matters in the media included Students from Institute of Forestry, Hetauda protesting in the highway demanding wildlife conservation, Free broadband internet reaches 5,225 schools across the country, and Suklagandaki Municipality, Tanahun is preparing to make 59 community schools tech-friendly.
'Education this Week' is a joint effort to analyze the press coverage of education in Nepal’s selected print media published in Kathmandu (Online scanning was stopped due to the shortage of staff time from last week - apologies with the readers). The main aim of this effort is to identify and explain major education issues picked up by the media and give back and foreground the news. This, we believe, will help policy makers and other responsible people to keep abreast with ongoing concerns and discussions on and around education. EduKhabar, in collaboration with the Center for Educational Policies and Practices (CEPP), has produced this analysis based on the news printed in Kantipur (Nepali) and The Himalayan Times (English) between 24-30 March 2021 (11-17Chaitra, 2077) - Editor.
Read this analysis in Nepali : संक्रमणसँगै बढ्दो जोखिम
प्रकाशित मिति २०७७ चैत २० ,शुक्रबार

Kathmandu - This week policy matters were reported the most in the media including news as PM directs ministry to design masterplan for overall development of education sector and complaint against schools for defying government order. The matter of access to school in the rural municipality is.....