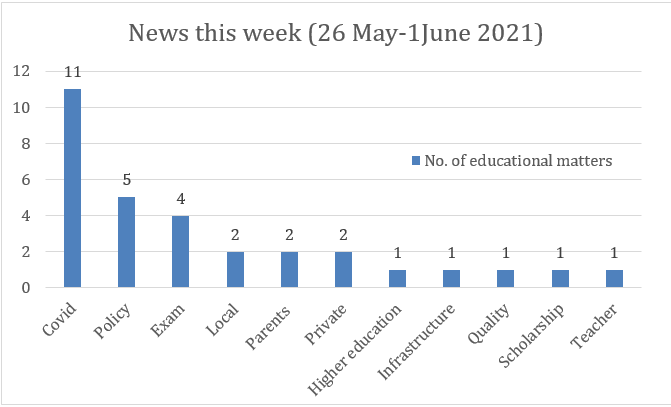 Kathmandu -  This week's education news focused on provisions of the new budget. While some news stated an increase in education budget, it was also noted that the percentage of overall budget dedicated to education had reduced this year. Other news included NEB decided to conduct the examination of SEE through alternative measures, online classes a far cry for many students, and closure of a private school in Lalitpur.
- News stated that the government has increased the budget for education, science and technology sector by nearly five per cent for the fiscal 2021-22, while it has failed to introduce any new programmes to improve the education sector in the country overall. The budget of Rs 180.04 billion had been allocated under the title. The government has also allocated an additional budget of Rs 5.55 billion to increase facilities to teachers and staff of the Early Childhood Development Programme. The government has aimed at achieving 100 percent school enrolment in primary level, allocating a budget of Rs 8.73 billion to provide nutritious meals in the schools for around 3.5 million primary level students.
- Another news article stated that the government presented the budget with the aim of providing internet facilities to community schools within two years. According to the government's statistics, computers have reached only 11,000 out of 27,000 community schools across the country so far. ICT labs have been set up in only 1,000 schools. A budget of Rs 1.20 billion has been allocated for alternative learning, stated the news.
- A letter to the editor stated concerns that the budget for education has reduced 0.32% to 10.93% of total budget while the government has committed to dedicate 20% of our budget on education. It also highlighted that the government has continued to expand the Presidential Educational Reform Fund, and doubled its fund in three years, while experts claim no benefit from the program. It appreciated the increase of salary of Teachers at pre-primary levels to fifteen thousand rupees while noting that the salary could have been given directly from the local government instead of the federal government trying to take credits for a portion of the salary. It also questioned that the commitment made by the government to make higher education research oriented did not reflect on the budget allocation.
- News stated that the National Examination Board has decided to conduct the examination of Grade 10 (SEE), through alternative measures this year due to the surge in COVID-19 cases. NEB’s chairperson was quoted stating NEB has already started preparation to conduct the examination and complete it by mid-July.
- News stated that the local levels are looking forward to a new academic year from June-July (Asar) by ending the current academic year by mid of June (Jestha). Even though the educational institutions across the country have been shut down due to the lockdown, the municipalities are preparing to start the academic session 2078 by publishing the final results from the internal evaluation, stated the news.
- An editorial article expressed that the children in rural areas, where broadband internet service is not available, have been deprived of their right to an education since the lockdown. In order to bridge the digital divide, the government has unveiled a plan to expand broadband internet service in rural public schools within two years.
- News stated that a total of 23 professors and officials of Tribhuvan University have lost their lives to the Covid pandemic. According to the TU Information and Public Relations Division, a total of 616 university teachers and officials of the TU have tested positive for coronavirus.
- News stated that Makwanpurgadhi Rural Municipality of Makwanpur is going to give four scholarships to study MBBS (Doctor). Scholarships will be provided from this year to help low-income students residing permanently in the village municipality in their undergraduate studies in health sciences, stated the news.
- An opinion article expressed that in the present context of pandemic, students can be recognized and marked for their active engagement in society and their neighborhood. Such standardization, or accreditation, can be an important tool for current system learning. It stated that there is little attention on the impact of Covid in students of primary level who have been deprived of learning to read and write in early age. The writer suggested that the impact of this can have larger consequences than for students of higher level, and called for mobilization of senior students from class six and above to ensure timely introduction to written language. It also stated that this could be an opportunity to institutionalize the transformation of reading into learning. The writer also stated that the benefits of exposure to nature on wellbeing and holistic learning has been recognized internationally. He highlighted that for us this will be a contextual approach of holistic learning for children by engaging parents in the process and also benefiting adults to learn better.

'Education this Week' is a joint effort to analyze the press coverage of education in Nepal’s selected print media published in Kathmandu. The main aim of this effort is to identify and explain major education issues picked up by the media and give back and foreground the news. This, we believe, will help policy makers and other responsible people to keep abreast with ongoing concerns and discussions on and around education. EduKhabar, in collaboration with the Center for Educational Policies and Practices (CEPP), has produced this analysis based on the news printed in Kantipur (Nepali) and The Himalayan Times (English) between 26 May-1 June 2021 (12-18 Jestha, 2078) - Editor.

Kathmandu - This week there was nominal news regarding educational matters as the media continues to focus of Covid pandemic, budget policy and environmental constraints in the Chure region and political matters. The government’s decision to publish SEE results on the basis of internal as.....