Kathmandu - This week the media continued on coverage of news about the policies presented in the government’spolicy proposal with priority to higher education institutes. Among different forms of irregularities corruption by TU Service Commission(TUSC) in the appointment process for staff was the highlight of the week.News about school students asked to attend government program under unfavorable condition was followed by multiple letter to editor throughout the week. The government’s recommendation to use public school land for other purpose also was covered with multiple specific examples, with mixed response from different sectors.
- News stated that Political leaders will gain more control over universities as per the new amendment bill. The new amendment will give the Prime Minister and the Education Minister more authority to investigate, give orders to assign and change office staffs of the university. The taskforce formed to advice on staff recruitment for universities and medical institutions, suggest that President and Vice President of the nation be assigned as Chancellors for University as Ministers aren’t able to dedicate enough time for universities. The taskforce suggests Vice Chancellor, Director of Service Commission, Rector, Registrar, Dean, Executive Director, and Campus Chief positions be filled throughan open competition. At present, the political influence in selection of these positions has been criticized widely. It recommends a seven member committee that can call for position of Vice Chancellor (VC).
- In response to the new provisions,formerVCs from different universities collectively calledto stop political intervention in universities to ensure better and uninterrupted academic growth of the institutions. The recent policy recommendations suggest stronger control of the government over universities. This will impact its academic sovereignty and infringeits right to freedom of choice to pursuit independent academic future.
- It was reported that policy recommendations had tried to hand over the universities to Education Sectary – the chief of staff of the Ministry of Education. One of the Ex-VCs recommended that an independent competent individual or group should undertake the responsibility of the university, not the government itself. An editorial in Kantipur Daily questioned the ability of the politicians who commit to change the world but have fail to make the right decisions for the improvement of educational institutions be it the public school they studied ora university. The editorial stated that the recommendationsof the taskforce formed to advice on staff recruitment for universities and medical institutionshave failed to address the dire need to improve the quality of education: Political intervention affecting the universities’ drive towards academic excellence will remain unchanged by the recommendations of the taskforce. A Board of Trustee approach to regulate universities would be better to insure independent and sovereign operation of universities- the editorial stated.
- Follow up news about corruption by TUSCofficials continued to make news headlinesthis week as well. Successful candidates of a written exam taken byTUSC were mostly relatives of the TUSCofficials and political leaders. Theinterview of the candidates declared successfulon written exams was halted after one of the members of the TUSCbroke outthe irregularities in the written exam. Government’s think-tank head stated openly in the media that country’s universities are no longer the centers of academia.This incidentwas followed by multiple letters to editors stating the critical state of TU caused by the lack of regulation and internal irregularities. An opinion article questioned the intent of the personnel who come to work in institutions such as TU. Figure 1: On the picture is the banner Tribhuwan University under a row of people with garland to welcome a dignitary. Caption text reads ‘The leader has come. Nobody shall greet him as uncle, brother-in-law etc. May 15_Katipur Daily.
- News about school students asked to attend government program under unfavorable condition was followed by multiple letters to editors throughout the week. The incident occurred in Routahat to welcome the VicePresident in his visit to the municipality for a program. A letter asking the schools to attend the programcompulsorilywas sent to the schools by the Municipality. It was reported that though students were summoned to the program, no food or place to sitwere offered to them. They had walked for an hour under scorching heat to arrive to the event venue. The news was followed by many letters stating the violation of the child rights and exploitation of young children under the hands of the government. 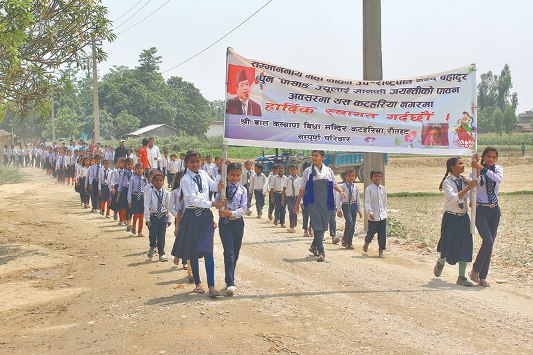 Figure 2: School students walk an hour in 40 degree to‘welcome’ the Vice President, May 15_Kantipur Daily
For people who have survived Panchayat system reminds of the era. It is hoped that coverage of such incident with the perspective of the student being the major theme of coverage will surely make program organizers aware to review their approach to mobilize school students in programs that aren’t necessarily relevant to them. Such incidents have keptrecurring in the society while this is a rare incident of its coverage in the media from the perspective of a student.
- News about the lack of access to secondary school causing early marriage in rural areas was also covered this week which was followed by an editorial in The Himalayan Times (THT). The incident from Himali Rural Municipality where girl child were forced to getting married early as there were no schools above grade 10 in THT. The article was followed by an editorial that linked the dire need to ensure access to higher secondary education to girls in rural municipalities.
- News about shadow government formed by Nepali Congress with one of its prominent young political leader and formerminister Mr. GaganThapa appointed as the shadow Minister of Education, was also covered in the media this week. The shadow government will work to generate public pressure by bringing to the fore corrupt activities in respective ministries by conducting micro-monitoring while also evaluating different policy recommendations by the government and presenting alternatives to them.
News about jobs being fixed in some public schools before the interview based on personal contacts was also reported. There are more staffs than students in some schools at present. Different news about the government’s intention to use land of different schools for other public purpose was also covered. The news was followed by letters to the editor that criticized the lack of clarity and farsightedness of the government about property of the academic institutions. News about locals of Kirtipurstrike to force early completion of road construction was covered from the perspective of student’s access to education. News about the intervention of the courts in multiple cases that instructed academic institution to admit students against the universities policy was also reported this week.
'Education this Week' is a joint effort put to analyze the press coverage of education in Nepal’s selected print media published in Kathmandu. The main aim of this effort is to identify and explain major education issues picked up by the media and give back and foreground of the news.This, we believe, will help policy makers and other responsible people to keep abreast with ongoing concerns and discussions on and around education. EduKhabar, in collaboration with the Center for Educational Policies and Practices (CEPP) , has produced this analysis based on the news printed in Kantipur (Nepali) and The Himalayan Times (English), Dailies, Himal Weekly(Nepali) and BBC.com(international online portal)between May 15-21, 2019 (Jestha 1-7, 2076)- Editor.
Read last week’s analysis : Corruption in education and inclusion in school education