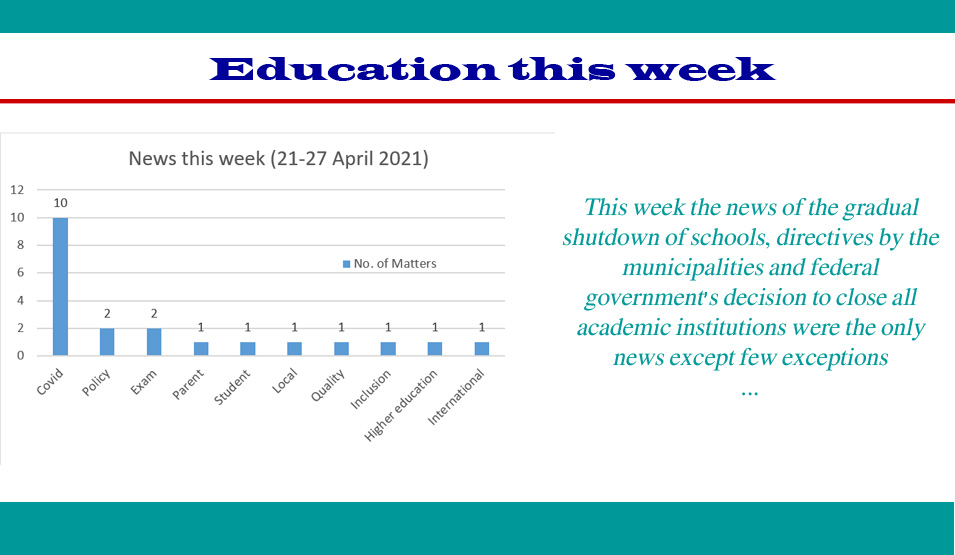 Kathmandu -  This week the news of the gradual shutdown of schools, directives by the municipalities and federal government’s decision to close all academic institutions were the only news except few exceptions.
-        This week the Cabinet decided to shut schools and colleges for an indefinite period, according to the minister of law, justice, and parliamentary affairs. With COVID-19 infection spreading at an alarming rate among schoolchildren, the government has called for the closure of educational institutions from April 20.
-        Another news reported that TU, the country’s largest varsity, has suspended all its ongoing and pre-scheduled examinations for an indefinite period. Issuing a public notice, TU said the decision to suspend exams was taken to introduce prohibitory orders in major urban areas of the country. The COVID-19 Crisis Management Centre had recommended that the government suspend all university examinations as well. Last year, TU examinations were postponed for up to nine months due to the nationwide lockdown.
-        Previously KMC had also decided to close the schools after parents’/guardians’ request for suspension of physical classes considering the rising number of virus cases. School closure gives parents a sigh of relief, the news reported.
-        Another news article reported that police took the private school operators and 11 teachers under control for operating schools amid soaring coronavirus cases in Saptari. The municipality and district administration office had issued a notice to close all education institutions till May 13.
-        News reported about misuse of authority stating that allocation of Rs. 2.5 million to Rs. 10 million has been made for some of the schools based on recommendation of President Bhandari and other close political leaders with access to power. The news had also quoted an education expert stating that such Presidential Education Improvement programs are unnecessary and only serve the purpose to fulfill the wish of the president to exercise executive role.
-        Another news article reported that the Ministry of Education has started the homework of running classes on television and setting up its own data center for online classes operation.
-        A news article stated that Hetauda Sub-metropolis has decided to give minimum wage to the teachers of government Early Child Development (ECD) classes run in its area. ECD teachers had been earning a total monthly salary of Rs 7,000 of which the federal government was supporting Rs. 6,000 while the provincial government was supporting Rs. 1000. The teachers will get Rs. 13,500 monthly if the minimum wage is implemented, said chief of the education department of the sub-metropolis. Implementing the minimum wage will add about Rs. 10 million to the Hetauda sub-metropolis annually. There are more than 100 ECD class teachers in Hetauda sub-metropolis. They have been working for a long time on low wages.
This is a positive step towards the right direction and similar policy decisions should be replicated across other municipalities. This can ensure that there is scope for selection for better ECD teachers and that experienced teachers can be retained in this level and profession. In many countries with better academic performances primary level teacher profession is highly regarded and a very well paid job demanding more skill and experience, recognizing higher influence for early teachers in children’s life.
- An opinion article expressed that the national university Tribhuwan University still uses the conventional way to produce knowledge. It undermines ideas of inclusivity and equality in education. It stated that the university neglects research and analysis of the pervasive deep inequality in the society and unequal access to education in Nepal. It carries the historic upper caste legacy in producing knowledge and disseminating it. The writer further suggested that for TU to be reflective of the institution’s commitment to diversity and promise to nation building, it must be inclusive of the entire universe available in the society, both among students and teachers.
- Other news included an international news on Delhi-based South Asian University (SAU) ordered residential students to leave the dormitory with increasing risk of COVID. Death of a female student of a private school while parents claimed the school's negligence for the incident in Tilottama Municipality was also reported in the media.

'Education this Week' is a joint effort to analyze the press coverage of education in Nepal’s selected print media published in Kathmandu. The main aim of this effort is to identify and explain major education issues picked up by the media and give back and foreground the news. This, we believe, will help policy makers and other responsible people to keep abreast with ongoing concerns and discussions on and around education. EduKhabar, in collaboration with the Center for Educational Policies and Practices (CEPP), has produced this analysis based on the news printed in Kantipur (Nepali) and The Himalayan Times (English) between 21- 27 April 2021 (8-14 Baisakh, 2078) - Editor.