Kathmandu - The government decided to postpone the Secondary Education Examinations (SEE) until further notice. The government took the decisions in its bid to prevent the public from corona virus infection. The exams were scheduled to begin on Thursday.
The government had already decided to close all schools, colleges and universities. It also postponed all the scheduled university exams for now. Earlier, the government had decided to continue the SEE and to have a health desk at all the exam centers despite closing all academic institutions. It is not sure when the exams will take place next.
This week media covered majorly on SEE exam details and the impact of Corona Virus in education, nationally and internationally. SEE exams schedules remained uncertain till the end of the week. This week there was coverage of a lot of donation done by private institutions to academic institutions, public schools and civil society organization working in public schools.
New on registration of Ayurveda university bill in the parliament was followed by an editorial appreciating the move. Power sharing among ruling and opposition party for positions of higher education institutions was the topic of an opinion article that criticized the wrong political practice that was against the norms of democratic system.  Multiple opinion articles discussion about the new school curriculum and questioned the decision to make mathematics limited to optional subject.

- Power sharing by the opposition, violation of parliamentary norm stated n opinion article. The hobnobbing by the Opposition with the government, leading to the appointment and retention of some Congress nominees as vice chancellors and ambassadors respectively, has sent a chill up the spine of bona fide Congress volunteers claimed the author stating it is contrary to the spirit of parliamentary democracy.The Opposition cannot play this role effectively after maintaining such an illicit relationship with the government. The impact of such deals on monitoring of academic institution at political level failed to be part of the article. The article somehow stated the core cause of failed political intervention in higher education and the degrading statue of academic institutions.

- Another opinion article stated that the new high school curriculum wasn’t scientific. It appealed the state to refrain from making half-baked decisions that have grave implications on future generations of the country. Stating mathematics remains an inalienable part of modern day sciences, with its applications expanding to fields ranging from economics to epidemiology, the author questions Curriculum Development Centre’s proposed curriculum for grades 11 and 12 with mathematics only as one of the subject of choice available in grade 11. The author claims this undermines the relationships that the physical or chemical sciences bear with mathematics. Another opinion article stated that students of science and finance for whom mathematics is not made compulsory, will have trouble in catching up in higher levels if their math base is not made strong enough by making maths compulsory for them. Instead of separating maths as a different subject, its should be for all students by making it more simplified and practical for all students concluded the author.
- The Yogmaya Ayurveda University Bill,wasregistered by the Ministry of Education, Science and Technology, at the National Assembly aiming to produce skilled human resources in Ayurveda, ancient health care method, through study and research. As per the bill, the government shall establish the University for Integrated teaching-learning and research activities in Ayurveda. Its central office will be established in Arun valley. “The university shall be an autonomous and corporate body with perpetual succession,” read the bill. The university shall consist of assembly, executive council, academic council, research centre, learning council and other agencies as prescribed. The university may operate schools on Ayurveda, Ayurveda nursing, medicinal plants, yoga education and natural medicines stated the report. It is also allowed to establish and operate teaching hospital in accordance with the standards set by the Nepal Ayurvedic Medical Council. The prime minister will be the chancellor of the university and chairperson of its assembly.  The news was followed up by editorial appreciating the move. 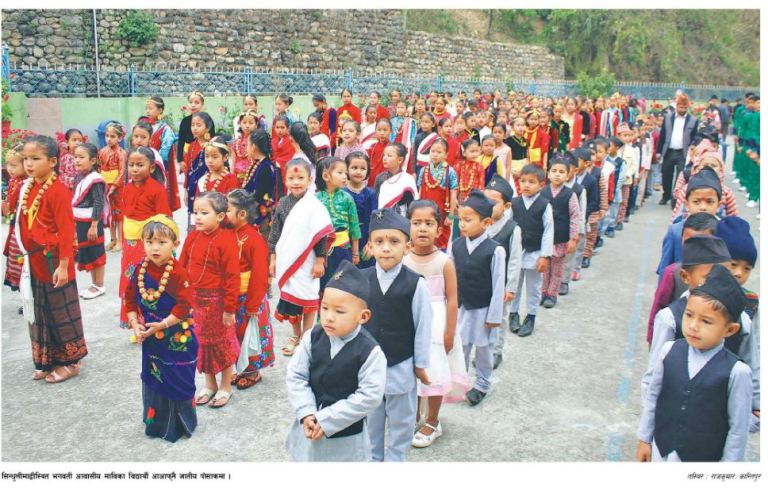 Figure 1 : School assembly of a school in Sindhuli where CulturalUniform is made compulsory for two days a month_March15_2020_KD
- A news covered a story of a school where cultural dress is the uniform for two days a month. The news also reported that students are allowed to speak in Nepali in those days. Other days, students will be fined for speaking in Nepali. Even teachers are gradually suggested to wear cultural dress informed the principle. The principle stated that such practice is to grow interest among students of their cultural identity, and to ensure they stay connected to their culture. Such practice will help student understand and realize the concept of diversity and inclusion stated the principle. The fact that students aren’t allowed to speak in nepali in rest of the days was not further discussed in the article.
- A letter to editor stated the increasing trend in school to punish students speaking in nepali. With popularity of English or vice versa, the trend of sending children abroad for studies and work has become the minimum norms in the society. The author called in that schools should have to work in restoring the vibrancy of the nepali language, or its in the direction of decline among new generation.
- Medical Education Council has prepared anIntegrated medical education calendar. In accordance to the Medical education act,entrance exam, dateline for admission, annual exam schedule along with final exams are included in calendar.The representative of Medical Education Council also stated that the procedure of Integrated entrance exam for all colleges was also prepared.
- KU did a contract with AIT to conduct a program where an engineering course of dual degree, bachelors and masters can be completed in 5 and half years. Professors of the university itself protest the decision, stating lack of consultation with the department and professors prior to doing such academic decision on behalf of the university.
'Education this Week' is a joint effort put to analyze the press coverage of education in Nepal’s selected print media published in Kathmandu. The main aim of this effort is to identify and explain major education issues picked up by the media and give back and foreground of the news.This, we believe, will help policy makers and other responsible people to keep abreast with ongoing concerns and discussions on and around education. EduKhabar, in collaboration with the Center for Educational Policies and Practices (CEPP) , has produced this analysis based on the news printed in Kantipur (Nepali) and The Himalayan Times (English), Dailies andHimal Weekly (Nepali) between March 11-17, 2020 (Falgun 28-Chaitra 4, 2076)- Editor.
Read this analysis in Nepali : अन्यौलमा एसईई
Read last week’s analysis:University to have ‘Board of Trustee’