Preparations for reopening of Academic Institutions with physical classes

Kathmandu -  With the COVID-19 vaccination drive going on and the situation getting safer, education institutions across the country are considering resuming their teaching learning activities physically. News covered this week also includes ground practices like senior students’ class, activity-based curriculum for better results, private schools’ free admission drive, March against 'Educational Regression and other reports related to safety in schools. 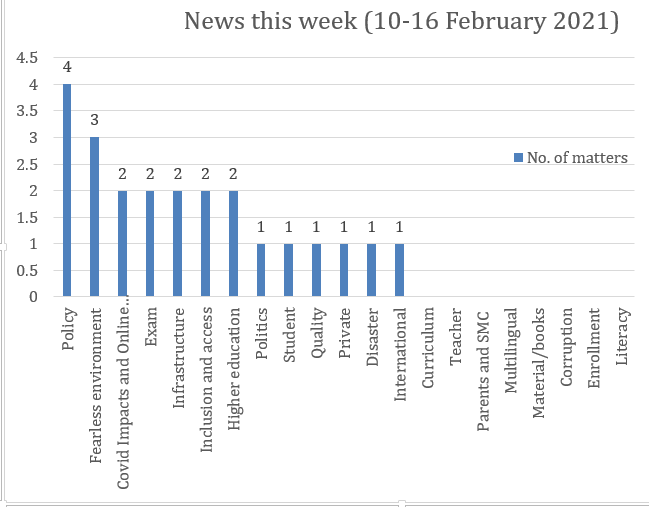 COVID Recovery
-  News stated that Tribhuvan University will be running classes in the physical presence of teachers and students from mid-March. The classes were run three months later from the beginning of the new academic session. Some colleges affiliated to TU had resumed classes physically after obtaining permission from the local unit. TU’s Registrar had reasoned that delay on the part of TU in running classes was due to delay in publishing the results of 10 plus two levels. He further informed that TU has been taking exams of various levels since November last year. Established in 1959, the university has 1,124 affiliated colleges.
-  News reported that MoEST has written a letter to the Ministry of Health and Population urging it to prioritise vaccination against COVID to teachers and officials of schools, colleges, and universities. A secretary-level meeting of the education ministry urged the home ministry to carry out vaccination on priority basis. Earlier, various organisations related to the education sector like National Teachers’ Federation, Nepal Association of Guardians, Private and Boarding Schools’ Organisation Nepal, N-PABSON, and other similar associations had led a delegation to the Education Minister asking him to prioritise inoculation against COVID-19 for academicians. The Education and Human Development Centre under the Ministry of Education has already written to the education departments of all 753 local governments to send details of teachers in the local levels.
- Another news stated that the responsibility of SEE was handed to the center noting that the move was of the federal government to keep the right to education aside from the state and local levels. Contrary to the spirit of the Constitution, the Secondary Education Examination (SEE) will be conducted by the National Examination Board under the Federal Government as was done previously. The Ministry of Education had sent a proposal to the Council of Ministers with four options to run SEE from schools, local level, state and center.
- News stated that MoEST is preparing to extend the current academic session till Mid May- mid June (Jestha). The cabinet had given approval to maintain the academic session by amending the SEE and education regulations from the center. The rule states that the new academic session will start on the 1st of Baisakh (mid April-mid may) and end in mid- April (end of Chaitra). The current academic session is being extended for two more months due to the Corona Pandemic. If the academic session is extended, the annual examination of all classes at school level will be held at the end of mid may- mid june (Jestha) and the new academic session will start in Mid June-Mid July (Asar).
Ground Practices
- A piece of news reported on Mothers’ penchant for education in Tanahun where 22 students, most of whom are in their 60s, are studying in the school. Students had reported that it was convenient to study with people of the same age.
- A letter to the editor warned parents to not be lured by free admission advertisements by private primary schools, launched on the occasion of Saraswati Pooja, celebrated across Nepal to pay homage to the Goddess of Education, Music, Art and Culture. Parents should know that it is a way of enticing kids in the name of teaching alphabets for the first time, the writer stated.
- March against 'Educational Regression', demands to end the political sharing of posts from appointment to recruitment in educational institutions was covered this week in the media. A ‘massive civil movement’ (Brihat Nagaraik Aandolan) has staged a demonstration at the Tribhuvan University campus in Kirtipur. In the March dubbed as the 'Citizens' Movement Against Educational Regression', professors and students lamented the state's failure to provide the right education policy, leaving millions unemployed. Participants expressed dissatisfaction with the state's support for privatization and commercialization of education.
- Geta Medical College, which has been embroiled in controversy for two and a half decades, has reached the final stage of operation as reported in the media. The first medical college of the far-western state will start operation within a year without any obstruction the news stated.
- An opinion article “What matters in learning? Perfect planning “expressed that the writer’s query of what is the most common challenge that teachers face, leading to the conclusion that over ambitions curriculum without clear objectives of the curriculum was one of the causes. Textbooks make a good resource, but it shouldn’t constitute the syllabus any more. This sort of planning drags teachers out of their comfort zone the article stated.
Cases of Safe Environment in Schools
- An opinion article expressed that the present education should change its perception with gender roles. The present textbook still shows the mother doing the housework and the father being busy in the office, stated the article.
- A news titled ‘School staff held following student’s death in Jhapa’ stated that police have arrested an employee of Champapur Secondary School in Jhapa, in connection with the death of a student. The personal was arrested for investigation after the school and the child’s parents registered a complaint. As per sources, the personal had punished the 10- year-old from Grade IV by pulling his ear a few weeks ago.
- Another news of a student of class 10 being punished with physical beating and action taken by the district student union was also reported in the media. The news had stated that the student union representatives had demanded resignation of the teacher. Later the teacher apologized in front of the local government representatives, committing to not repeating it.
- A news article reported that the incident of rape and murder case of 17-year-old female student has spread fear among the students and teachers in Sanatan Dharma secondary School in Dogadakedar Rural municiaplity-3 of Baitadi.
Cases of Violence against women and more often students, are more frequently being reported in the media. Such incidents impact not only the mental health of students but also questions the safety of students to go school regularly. 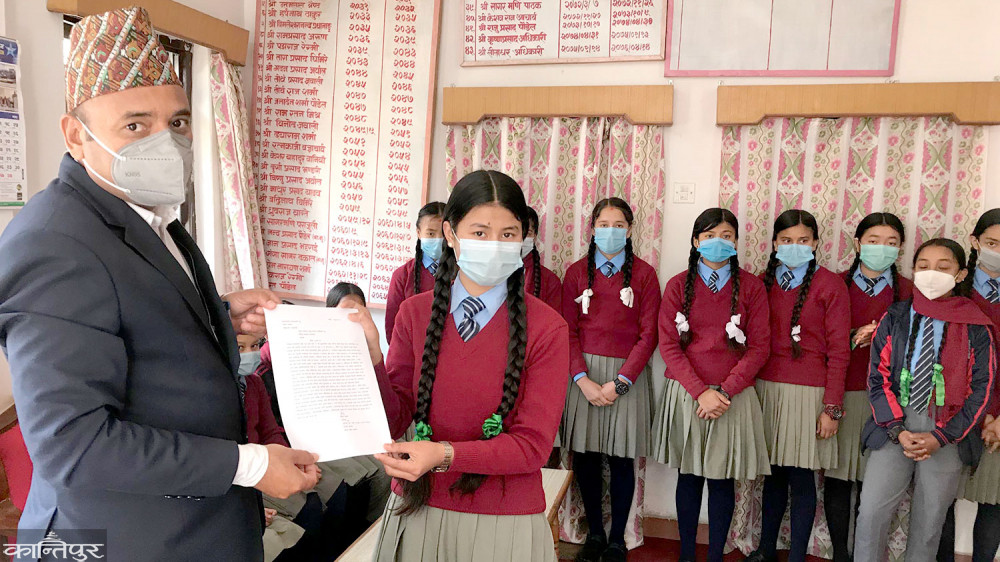 Picture: The students of Little Garden Academy in Beni has sent a memorandum to the Prime Minister saying that they feel insecure as the person involved in the murder of Bhagarathi Bhatt, 17, of Baitadi has not been identified. This news was posted in Kantipur Daily on 12 February 2021.
- Other news included damage to Phundruwa Basic School at Sirijunga-3 Tellok after the forest fire reached the settlement; An agreement signed between Lord Buddha Education Foundation and The Association of Chartered Accountants of Nepal (ACAN) for educational cooperation for scholarship.
'Education this Week' is a joint effort to analyze the press coverage of education in Nepal’s selected print media published in Kathmandu (Online scanning was stopped due to the shortage of staff time from last week - apologies with the readers). The main aim of this effort is to identify and explain major education issues picked up by the media and give back and foreground the news. This, we believe, will help policy makers and other responsible people to keep abreast with ongoing concerns and discussions on and around education. EduKhabar, in collaboration with the Center for Educational Policies and Practices (CEPP), has produced this analysis based on the news printed in Kantipur (Nepali) and The Himalayan Times (English) between 10-16 February 2021 (28 Magh-4 Falgun, 2077) - Editor.
Read this analysis in Nepali : भौतिक रुपमै सञ्चालनको तयारीमा शैक्षिक संस्थाहरु
प्रकाशित मिति २०७७ फागुन ७ ,शुक्रबार

Kathmandu -  This week manipulation to give affiliation to private medical colleges, students taking actions for the injustices, 1000 private schools on the verse of closure, were reported. Other matters included technical education absent in 118 municipalities, fearless environment in schools,.....